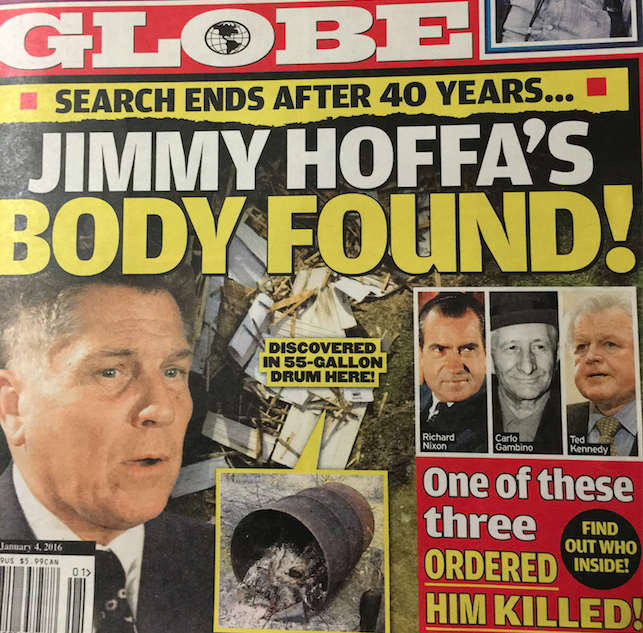 In a drugstore or grocery store line, tabloids are like fool's gold, eye-catching and enticing and capable of duping the naive. Some of the stories seem so outrageous, so far fetched. Yet, we often glance at them and read the headlines.

I was shopping in a suburb the other day and saw the Globe, a 62-year-old paper that's part of American Media, Inc. , a New York publisher of magazines, supermarket tabloids, including the National Enquirer, and books. The front page headline reads: “Search Ends After 40 years…Jimmy Hoffa’s Body Found! It has photos of Richard Nixon, mobster Carlo Gambino and Sen. Ted Kennedy with the subhead: “One of these three ordered him killed.”

I did stories on the Hoffa disappearance years after the 1975 abduction, first for The Detroit News and then the Washington Post. So I bought it for $4.99, just out of curiosity and amusement. My mother used to love to read the tabloids, and I’d buy them on occasion for her, even though I was often embarrassed to do so, and sometimes even told the clerk: “This isn’t for me, Really, it’s for my mother.”

I’ve had first-hand experience with tabloids. Starting in 2001, I was one of the lead reporters at the Washington Post on the case involving Chandra Levy, the D.C. intern who disappeared and was having an affair with Congressman Gary Condit. Condit was a “person of interest” in the case and made for good fodder in the tabloids, though he was never charged. At the Post, we were forced to run down the flashy tabloid stories about the case and Condit. More often than not, they were totally false.

The Globe story about Hoffa is just that: False and shameless. It’s pretty disgraceful that this trashy tabloid has published this story about the Hoffa disappearance and the whereabouts of his remains. Though no one has ever been charged, the FBI and investigative journalists have a pretty good idea that certain mob figures had a hand in the death to keep Hoffa from taking over the Teamsters again after serving time in prison.

Before we go on, I asked the Detroit FBI to comment on the Globe story.

“The report is not true,” said Detroit FBI spokesperson Jill Washburn. “As it is still a pending investigation, we have no further comment.”

One of the most baffling mysteries of the last 40 years – the shocking disappearance of union boss Jimmy Hoffa – has been solved!

After vanishing in 1975, Hoffa has finally been found buried in a garbage dump, sealed in a barrel – and a bombshell Globe investigation reveals the Teamster kingpin was murdered on the orders of Sen. Ted Kennedy!

The monumental discovery has been hushed up by the Justice Department. But a crack team of G-men unearthed a 55-gallon drum containing Hoff’s remains in a New Jersey dump shortly before Thanksgiving, confidential law enforcement sources reveals.

Now the sources say a top-secret dossier that pointed the fed to the burial site also fingered two hitmen – and one of the killers was working for Ted, the powerful Massachusetts senator who hated Hoffa”

“The lead came from paper written by Hoffa’s killer to a one-time lover,” says a law enforcement source. “These paper specifically mention Kennedy.”

The story goes on to say that Ted Kennedy ordered the killing to get revenge because he thought Hoffa was linked to the murder of brother Robert Kennedy in 1968. You might recall, a Jordanian citizen named Sirhan Sirhan was convicted in that killing.

It seems the tabloids can’t resist exploiting the death of Hoffa, regardless of the truth.

(Read What Really May have Happened by investigative journalist Dan Moldea)