Stamm: Careful What You Wish for with a Feel-Good Chorus to Get Rid of Rick Snyder

Spewing and sputtering can feel cathartic, but doesn't solve problems.

People across Michigan and across political lines are angry, disappointed and frustrated by state government mistakes, inaction and dismissals of Flint residents' water quality concerns in 2014-15. Many, if not most, of us want fair, prompt, long-term remedies -- plus full accountability for appointed and elected office-holders who were derelict. 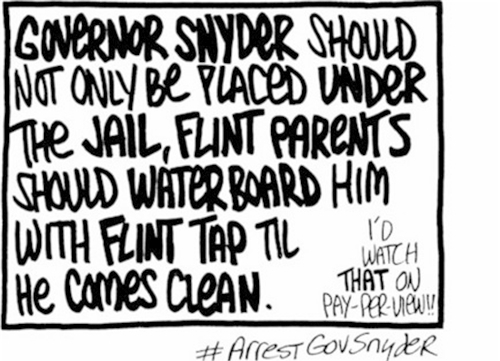 Part of a panel by Keith Knight, posted Tuesday at the popular Daily Kos politics blog.

Amid diverse voices calling to make things right are cries for the Republican governor's political scalp.

Blogs and social media posts use words such as "arrest," "jail," "resign." The cartoon at right is part of a panel titled "Flint" that was posted Tuesday at Daily Kos, which calls itself "the largest progressive community site in the United States."

In a more serious turn, an election board in Lansing on Monday unanimously approved a Warren school trustee's signature-gathering effort to recall Gov. Rick Snyder for his 2015 decision to move the state School Reform Office to a department under his control.

While the recall petition isn't related to the Flint debacle, it might as well be. Timing makes that link inescapable.

Voters may finally get a chance to recall Gov. Rick Snyder, who has come under fierce fire for his handling of the Flint water crisis.

Atop that post is a headline that seems to understate the steep, swift climb facing recall backers. "Gov. Snyder could be booted from office by August after recall petition approved," it says. 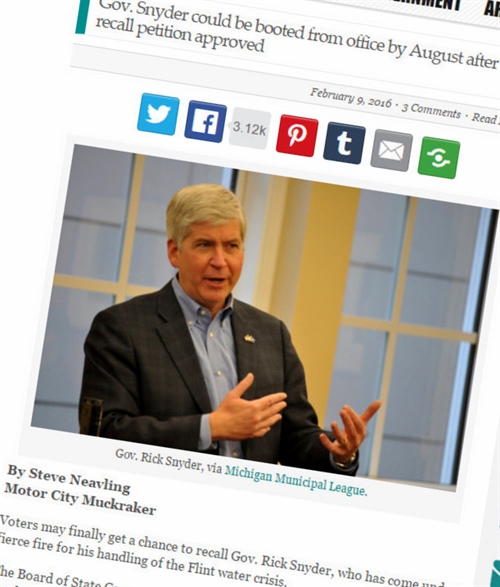 But unseating the governor in Year Two of his second four-year term is clearly a longshot. Critics need nearly 790,000 valid signatures from registered voters and have just 60 days to pull that off from whenever they start. The petition expires Aug. 6, so the goal is to force a recall vote as part of the Aug. 2 statewide primary for state Senate and House candidates.

"That’s an incredibly short period in which to get 789,133 valid signatures, even with real, paid staff on every busy street corner, and a brilliant marketing campaign," Ypsilanti blogger Mark Maynard posts Wednesday morning.

Only three Lansing officeholders have ever been recalled, and none was a governor:

(In 2008, House Speaker Andy Dillon survived a recall election. He was state treasurer under Snyder from January 2011 until he quit in October 2013.)

"Of course he should [resign]!" a former Michigan State political ethics professor, Richard Peterson, writes this month in a Lansing State Journal guest column. "This would honor a standard of public responsiveness that our officials must strive to meet."

Careful what you wish for

But 51 percent of those who voted in November 2014 elected this man to deal with crises -- even one caused by his people and neglected for too long. How does switching leaders in mid-emergency make things better, honestly? (Before anyone asks: No, he didn't get my vote either time.)

A successful recall would elevate Lt. Gov. Brian Calley to the top job through 2018 -- a prospect that Metro Times columnist Jack Lessenberry cites Wednesday with a suggestion to "get real:"

Here's what we know about Calley: He is supposed to be more conservative than Snyder. . . .

Calley would suddenly be an incumbent, get overnight face and name recognition — and be eligible to run for re-election in 2018. . . . Smart politicos know you ought to be careful what you wish for. You just might get it.

Exactly how would Snyder's resignation facilitate or accelerate a solution to Flint's public health crisis? I don't understand how such an abrupt departure would be in anyone's interest. 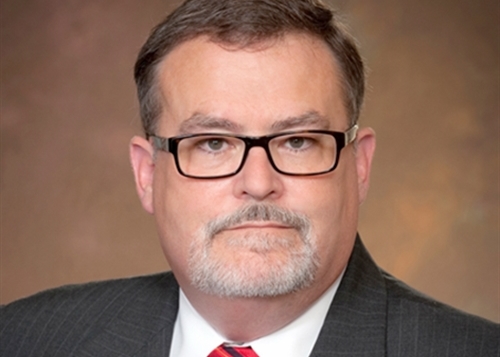 MEA president Steve Cook: "We gain absolutely nothing by the recall of Snyder."

Concern is echoed by the head of a 155,000-member teachers' union, even though it dislikes the governor. "In the unlikely event Snyder is actually recalled or resigns," says Michigan Education Association president Steve Cook, "the result would be devastating for MEA."

In a seven-paragraph email to board members and local unit leaders statewide Tuesday afternoon, Cook notes that Calley is "no better than Snyder" and adds: "We gain absolutely nothing by the recall of Snyder and quite possibly would be in worse shape very quickly."

From Ypsilanti, Maynard's new blog post explains why "I'm torn" about whether to sign a recall petition:

It’s highly unlikely that we’d see [the lieutenant governor] as an improvement over Snyder. Furthermore, I think it’s fair to assume that Calley would not feel the same responsibility toward the people of Flint that Snyder feels. . . .

We have to ask ourselves: is it in the best interest of the people of Flint who have been poisoned? And, second, I think we need to consider whether or not it leaves us in a better position to move forward as a state, putting the failed, non-democratic experiments of Rick Snyder and his Republican majority behind us.

And at Motor City Muckraker, Neavling joins the caution flag-wavers:

If Michigan voters oust Gov. Rick Snyder in a recall election, his replacement will be a Baptist conservative who was considered one of the most right-wing members of the state Legislature. . . .

The prospect of Calley becoming governor puts voters, especially Democrats, in a tough position when deciding whether to support the recall petition. 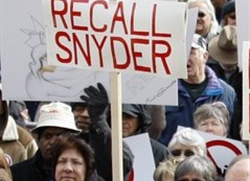 A higher-profile Detroit journalist writes this week about "what isn't helping in Flint," as Sunday's headline on Nolan Finley's Detroit News column puts it.

He mainly criticizes celebrities "streaking through Flint" and "Democrats who find profit in keeping this crisis rolling," but the editorial page editor's message also fits the recall and other piling on:

A crisis isn’t solved by finger pointing, grandstanding, gotcha games, exaggerations and hysteria. . . . . Instead of pulling together, Michigan is fracturing.

Reflexive lashing out is a hothead response. The challenges of fixing Flint require cooler heads, consistency and acts that don't make things worse.

It's time to ditch the rants about "handcuffs" and "booting from office." Flint deserves unity and new pipes, not political theater.