How Do You Rate Detroit on This New List of '11 Signs a City Will Succeed?'

The Atlantic magazine makes just two passing references to Detroit in a pair of March cover stories by national correspondent James Fallows on the theme of putting America "back together."

His look at "reinvention and renewal" is based on visits to cities large and small, including Holland, Mich. Fallows, a prominent author and journalist, didn't stop in Detroit as he and his wife Deb flew to various regions in his single-engine Cirrus SR-22 over three years. 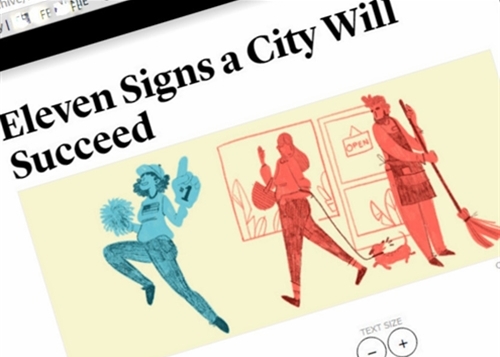 Still, his secondary article -- "Eleven Signs a City Will Succeed" -- serves as a calibration tool to gauge Detroit's 2016 status and upcoming projects.

The list is summarized below in his words, followed each time with our sense of whether that factor is true or untrue here. Totally subjective, yes, so reality-check chain yanks are encouraged.

We end with a tally of how many of these signs exist here. See if you agree:

♦ 1.) Divisive national politics don't dominate: "Overwhelmingly the focus in successful towns was not on national divisions, but on practical problems that a community could address. The more often national politics came into local discussions, the worse shape the town was in."
. . . . TRUE here, more or less. 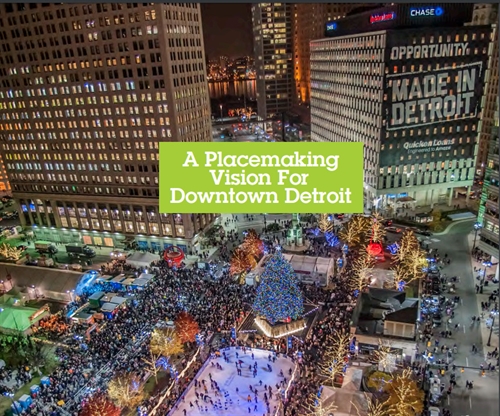 Cover of a 50-page study from Opportunity Detroit.

♦ 2.) Clear "local patriots:" "A standard question we’d ask soon after arrival was ''Who makes this town go?' . . . Sometimes it was a mayor or a city-council member. Sometimes it was a local business titan or real-estate developer. . .  The more quickly [a reply] was provided, the better shape the town was in."
. . . . TRUE. We know you think of the same name we do, instantly.

♦ 4.) People know the civic story: Detroit is given as an example of places that say "they are in the process of turning around." A civic story gives residents "a sense of how today’s efforts are connected to what happened yesterday and what they hope for tomorrow."
. . . .  TRUE. He makes the case.

♦ 5.) Downtown matters: "Downtown ambitions of any sort are a positive sign, and second- and third-floor apartments and condos over restaurants and stores with lights on at night suggest that the downtown has crossed a decisive threshold and will survive."
. . . . TRUE, inarguably.

♦ 6.) Research university: These "modern counterparts to a natural harbor or a river confluence . . . lift the economy by bringing in a student population . . . [and] . . . transform a town through the researchers and professors they attract."
. . . . UNTRUE. WSU Medical School isn't a major research campus. Ann Arbor is 45 miles west.
[Update: "WSU Med School is a leader in many fields of research. They're constructing a 200,000-square-foot biomedical research lab right in the city that will house 500 researchers and staff." -- Reader comment.]

♦ 7.) Successful, well-supported community college: "The more often and more specifically we heard people talk about their community college, the better we ended up feeling about the direction of that town."
. . . . UNTRUE. Sorry, Wayne County Community College District. Can't lie.

♦ 8.) Unusual public schools: "The common theme was intensity of experimentation."
. . . . UNTRUE. Detroit has more than a few admirable magnet schools, charters and specialized programs, but it's still DPS for now.

♦ 9.) Wooing newcomers: Fallows praises places that are "trying to attract and include new people.. . . . The same emphasis on inclusion that makes a town attractive to talented outsiders increases its draw to its own natives."
. . . . TRUE: Opportunity Detroit, tech incubators, employers, others have an impact.

♦ 11.) Craft breweries​: "A town that has craft breweries also has a certain kind of entrepreneur, and a critical mass of mainly young customers. You may think I’m joking, but just try to find an exception."
. . . . TRUE

Agree? Let us know why or why not below or on Facebook.