Local journalist Anna Clark shares "some news," as she understates it on social media.

She has a contract with a Fifth Avenue publisher in Manhattan to write "the dramatic story of Flint's water crisis," her agent announces Tuesday at Publisher's Marketplace, a trade site.. The book, "Water's Perfect Memory," will frame "Flint as a canary-in-the-coal-mine tale of how the underfunding of cities across America imperils the lives if its residents."

Clark, a Southwest Michigan native who has lived in Detroit since 2007, is the editor of "A Detroit Anthology" (2014) and the author of "Michigan Lterary Luminaries" (2015). No target date is given for publication of the Flint exploration by Metropolitan Books, a division of Henry Holt.

It's he first announced book about Flint's lead-poisoned water debacle. 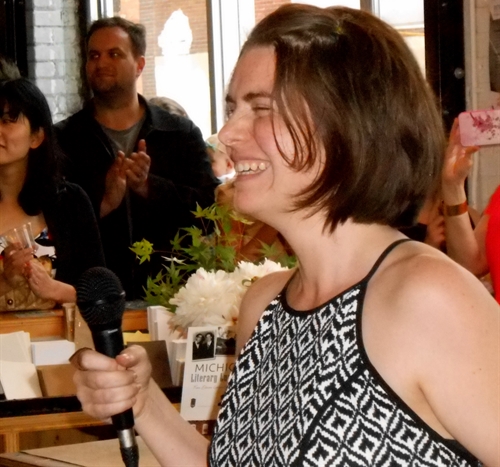 Anna Clark pledges "to do right by the citizens of Flint and other disinvested cities." (Photo by Alan Stamm)

The writer, a freelancer for Columbia Journalism Review and other national publications, posts at her blog:

The title comes from this line by Toni Morrison: “All water has a perfect memory and is forever trying to get back to where it was.”

It’s a line that haunted me for years, maybe because I grew up in a tiny town [St. Joseph] shaped by its river and by the shore of the inland sea that we call Lake Michigan. I wrote a short story called “The Memory of Water” that was included in my fiction thesis for Warren Wilson College’s MFA Program for Writers. This line was the epigraph.

But that was a very different kind of story. This is a breathtaking project, and I’m so grateful to have the opportunity to pursue this. . . . It inspires me to square my shoulders and give this my all.

I’m alert to the responsibility that comes with this project. This isn’t just a story; this is people’s lives. It is a story that will play out for generations.

And so, here at the beginning, I make these promises: