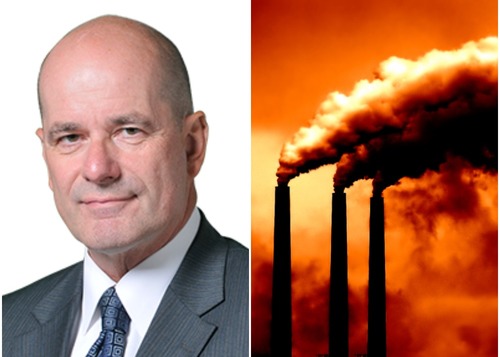 Detroit News columnist Nolan Finley is the reason the U.S. ought to consider instating a weighted, age-based voting system that gives people with limited years left on the planet less say.

In light of Time Magazine's selection of environmental activist Greta Thuberg as its person of the year, Finley devotes his weekly Sunday column to dismissing the Swedish teenager as insolent and ungrateful — arguing that plenty is being done to address global warming, the phenomenon that has us careening toward human extinction.

That plenty, he says, includes reduced reliance on coal and steps by automakers to eventually build carbon-neutral fleets. Manufacturing processes in general, he adds, are growing steadily greener.

This is true. Despite efforts by President Trump to bolster the most polluting energy source and roll back vehicle emissions standards, the U.S. has seen a 40-percent reduction in coal-fired energy generation over the past decade and some automakers are indeed moving toward higher fuel efficiency.

But the improvements fall far short of what scientists say is needed to stave off the worst effects of climate change. In other words: Greta is right.

An alarming report by the UN Intergovernmental Panel on Climate Change — an international consortium of hundreds of climate researchers — issued last year gave the world 12 years to keep global warming down to a maximum of 1.5 degrees Celsius, warning of dire consequences in the absence of urgent and unprecedented action. Already we're seeing more forest fires, hurricanes and rising sea levels — that would continue. The 1.5 degree goal would merely prevent hundreds of millions more people from being impacted by such catastrophes.

But we're on pace to exceed 1.5 degrees Celsius as soon as 2030. And very little is being done about it.

The U.S. isn't even trying to contribute to the more modest international goal of capping warming at 2 degrees Celsius, as per the Paris accord to limit greenhouse gas emissions. Trump is to formally withdraw the country from the pact next fall.

Even still, as of last year, just a handful of the nearly 200 countries signed on were actually on pace to achieve their voluntary goals. And even if every country met its goal, the planet would still be on track to warm by 3 degrees Celsius by 2100.

Turning the tide is not something that can be achieved by limited voluntary action on the part of U.S. corporations, nor can minor changes in consumer behavior like turning down the heat or walking to the store, as Finley suggests, make a great impact.

According to a summary of the IPCC report by Vox, climate change campaigners have compared the necessary action "to fighting a world war."

It would require replacing the bulk of the world’s fossil fuel generators with cleaner alternatives. It would drive the world to electrify everything. Planners would need to redesign cities to allow cleaner transportation. And governments would have to pay for their emissions at a price high enough to include the social costs of carbon.

And, we'll have to suck carbon out of the air using technology that has not yet been developed to-scale.

“All pathways that limit global warming to 1.5°C with limited or no overshoot project the use of carbon dioxide removal (CDR),” according to the report. And not just a little, but a lot, upward of 1,000 gigatons of carbon dioxide removed from the atmosphere by the end of the century. This will require machines that scrub carbon dioxide out of the air as well as biofuels coupled with carbon capture and sequestration. These tactics have their own energy demands and environmental drawbacks, and we may not be able to deploy them in time.

Finley argues that taking the type of action for which Greta advocates would be detrimental to business, limiting job opportunities ("The choice activists like Thunberg present is to allow more people to die now of the effects of impoverishment to spare them from being sizzled to death later.")

But the choice is not binary: Proposals like the Green New Deal would tackle the issue while employing millions to build a new energy economy. Yes, that would mean a greater role for government, the same government that will cover Finley's social security benefits, which will hopefully soon rid us of his commentary.

Because it is not the views of a teenage girl rightfully scared for the future of her generation that deserve dismissing. It is the privileged perspective of a 60-plus-year-old who would argue for putting the human race on the precipice of total wipeout before regulating the companies that brought us to the edge.