Freep verdict: Impeach Trump 'for his abuse of power'

One of Detroit's dailies stands with The New York Times, Washington Post and other newspapers supporting impeachment of you-know-who. 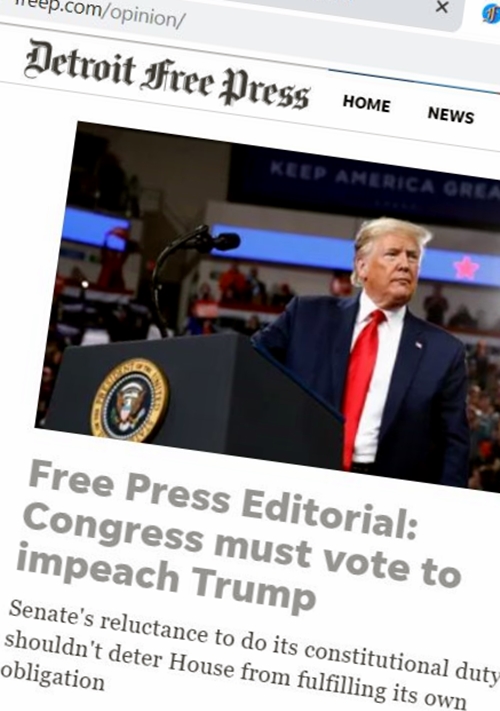 Of course it's the Freep, where a Tuesday editorial lays out "why Congress must vote to impeach President Trump."

Impeachment is not a game. ... And so it's crucial that the House of Representatives honors its constitutional obligation to hold this lawless president accountable for his abuse of power — even if craven senators lack the courage to do the same. ...

It took Trump's brazen attempt to extort Ukraine's assistance in his re-election campaign to convince most of those who represent Southeast Michigan in Congress that the House should undertake a formal impeachment inquiry. This was not the escalation of a relentless partisan crusade, but a marked reversal by elected officials responding to an unconstitutional usurpation of congressional authority. ...

Even if the White House and its craven servants in the Senate succeed in turning Trump's impeachment trial into a farce, Americans deserve to see the lawmakers they elected to represent them explain why allowing a president to extort an ally for personal advantage, flout congressional oversight and disparage honorable public servants is not a violation of their own constitutional oath.

With its 900-word call to action, the Free Press joins more than a dozen newspaper editorial boards backing impeachment -- including USA Today, the Chicago Sun-Times and the Los Angeles Times.

Among papers on the other side are the Chicago Tribune ("President Trump’s Ukraine misdeeds do not rise to the level of an impeachable offense") and The Wall Street Journal ("That's it? That's all there is?")