Lapointe: Lara Trump Speaks of God and the President at Macomb Rally 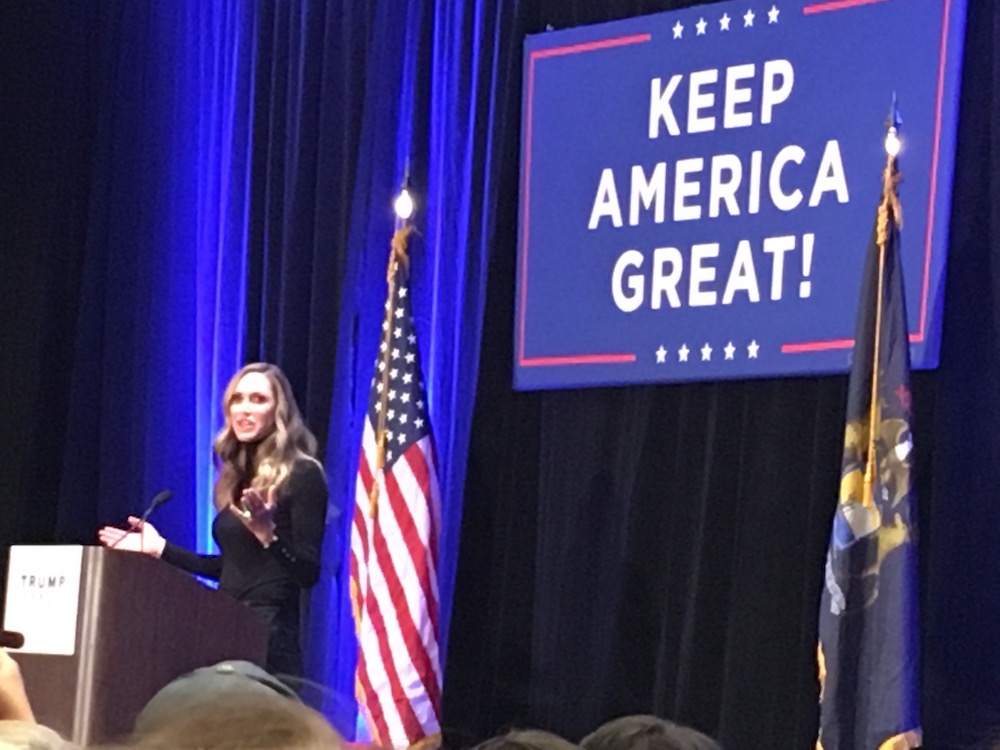 Lara Trump speaks to the base. (Photos: Joe Lapointe)

As Lara Trump spoke to Republicans Tuesday night in Macomb County, signs taped to the glass doors of the Wyndham Garden warned “Fire Alarm System Out of Service.”

At least one Sterling Heights fire official warily scanned the room filled with about 300 supporters of Ms. Trump’s father-in-law, the president of the United States.

But there was no cause for alarm during her short speech, from fire or anything else.

She didn’t seem alarmed that -- around Metro Detroit and the nation last night -- demonstrators were marching through streets, waving signs and chanting against Donald Trump's presence in the White House.

Ms. Trump – wife of Donald’s son, Eric – only incidentally mentioned that the House of Representatives plans to vote Wednesday to impeach Mr. Trump, making him only the third of 45 American presidents to face this constitutional punishment.

Instead, she touted her father-in-law’s planned visit Wednesday night to a rally in Battle Creek as he campaigns for re-election next November.

“Anybody gonna see him tomorrow here in Michigan?” she asked. A few hands shot up; a few voices called out.

“There is nothing on earth like a Trump rally,” Ms. Trump said. “The president is so excited to come here tomorrow and see everybody . . . This is such a special state for us.”

The prayers of a nation 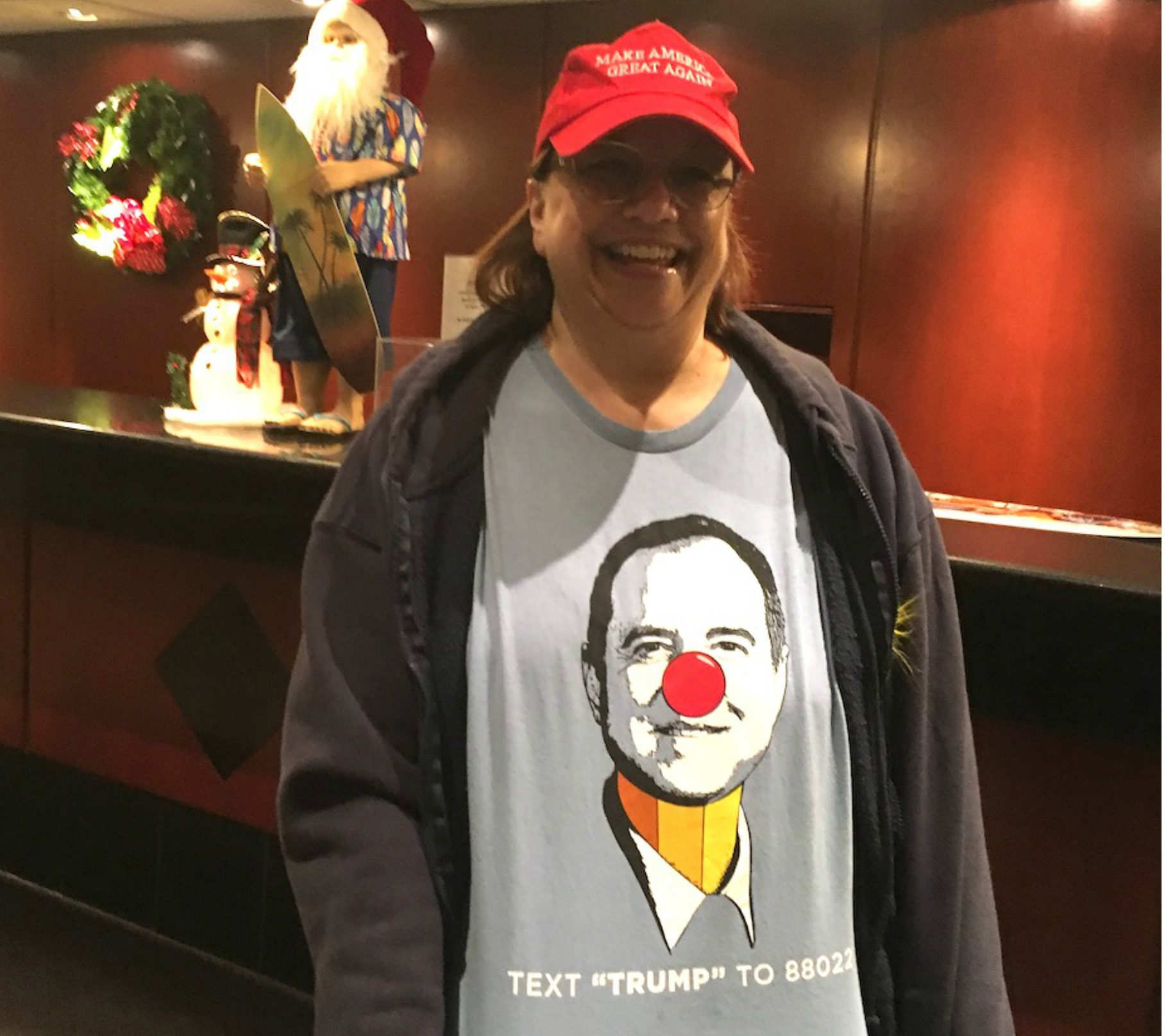 Not an Adam Schiff fan.

More than half were female and almost all were white, not surprising in a suburb once nicknamed “Sterling Whites.” In Trump’s 2016 victory over Hillary Clinton, Michigan’s narrow margin in his favor was key to the national upset and Macomb County’s big Trump margin helped flip Michigan.

Ms. Trump made no mention of the rambling letter sent Tuesday from the president to House Speaker Nancy Pelosi. Among other belches, Trump wrote:

* ”You have cheapened the importance of the very ugly word impeachment!”

* “You are declaring open war on American democracy.”

* “You are offending Americans of faith by continually saying `I pray for the president . . . ‘”

Although Lara Trump used less bombastic language, she did give a shout-out to prayer and God for Trump’s victory. 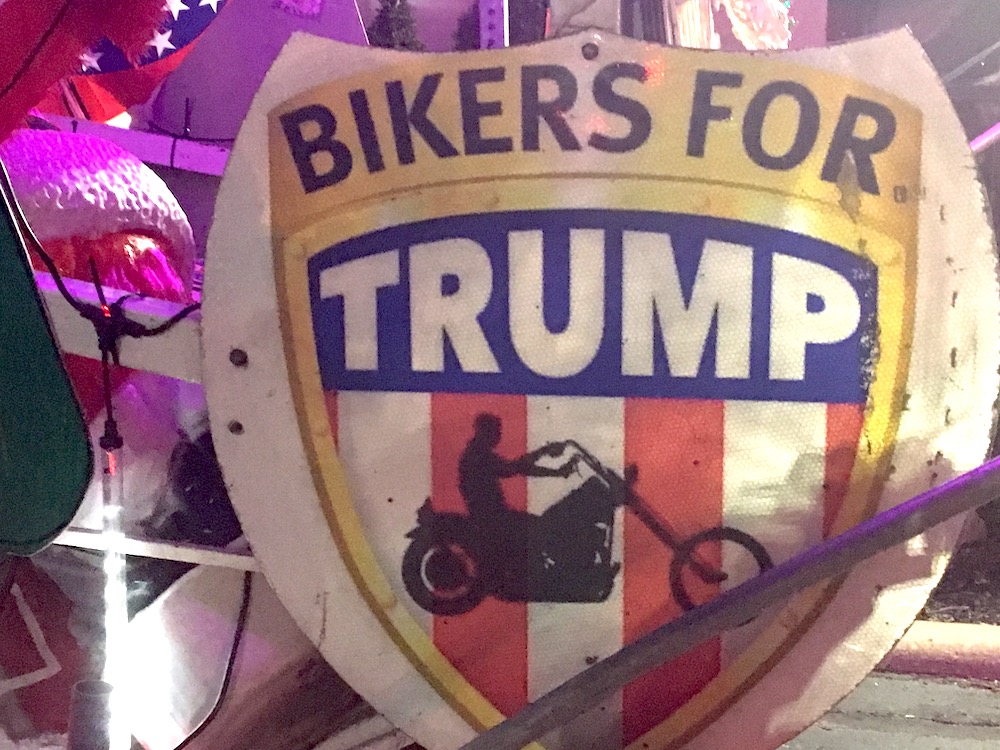 A little muscle at the Trump rally.

“The prayers of the country were answered,” Ms. Trump continued. “The president is being led every day by a higher power.”

Also on the religious theme, Ms. Trump noted how wonderful it is that she can now say “Merry Christmas” again, implying that it was somehow banned before Trump’s election.

The next best thing to Battle Creek

Once, when Ms. Trump mentioned Clinton, there came a few shouts of “Lock her up!’ although no sustained chanting. Her tone turned dire when the wealthy young woman warned the mostly older, blue-collar audience about the dangers of the liberal elites.

“If we go the way of socialism, it will mean the end of the United States as we know it,” Ms. Trump said. “Our country could end up like Venezuela."

The crowd responded with boos.

Before Ms. Trump appeared, chairwoman Laura Cox of the Michigan Republican Party struck the same theme to warm up the audience with call-and-response cadence.

“Socialism vs. capitalism,” she asked. “What do you want?”

“I can’t hear you!” she continued.

Before the main event, volunteers passed petitions against abortion and in favor of guns.

Among them stood a man who wore a black T-shirt that showed Trump wearing a Santa Claus hat with the words “Make Christmas Great Again,” along with a red, white and blue cowboy hat. Another wore a hat that touted the National Rifle Association.

Ms. Trump’s appearance was part of a major Michigan push by the Trump campaign this week. Vice-president Mike Pence will speak in Saginaw Township Wednesday morning before joining Trump in Battle Creek at 7 p.m. Attorney General William Barr will appear at a press conference in Detroit Wednesday to announce a new violent crime initiative at the U.S. Attorney's office.

One woman, who didn’t give her name, said she would not be able to be in Battle Creek and that Tuesday’s event was the next best thing. She wore a shirt with the face of Adam Schiff, the chair of the House Intelligence Committee, who ran the first round of impeachment hearings.

Instead of Schiff’s real nose, the picture showed a round, red clown nose and a literal pencil neck; the president often refers to Schiff as “Pencil Neck.”

She said wanted a vanity license plate reading “MAGA45” or “45MAGA,” but they were taken. The closest she could get was “MA45GA.”

She likes it, she said, because only Trump fans get it and wave to her at red lights.

“Liberals can’t figure it out,” she said. “So I don’t have my tires slit.”