A new Michigan state government commercial, aimed at cautioning young people about marijuana use, is criticized as an outmoded scare tactic. 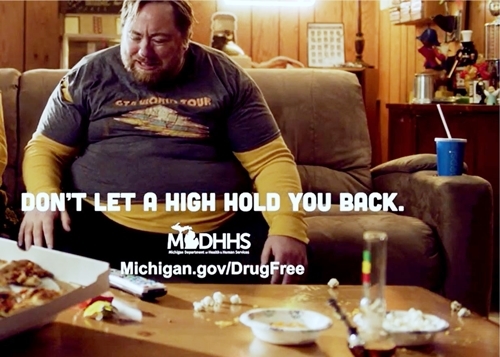 The half-minute ad from the Department of Health and Human Services is reminiscent of "reefer madness" warnings from decades ago, a business group leader tells The Detroit News.

Robin Schneider, executive director of the Michigan Cannabis Industry Association, called for the state to stop the ads. ...

"Are you high?" one character asks another in an ad entitled "Future Self." "I'm you in 10 years. No career. No friends. No money ... Marijuana messed with our brain. We can't focus."

Anothger critic is Rick Thompson, board member at Michigan's branch of the National Organization for the Reform of Marijuana Laws (NORML). He sees "an inconsistent message coming from the state," which has licensed 35 recreational pot retailers so far.

The new ads use old tropes and seem "like a step backward," Thompson said.

The federally financed spot below is part of a four-month campaign that started Christmas Week, Craig Mauger writes from Lansing. The state agency plans to spend $300,000 for placements on social media, YouTube, online music services and video streaming services, according to The News.

The topic was selected for an ad campaign because of Michigan's vote in 2018 to legalize recreational marijuana for individuals 21 years old and older, said Lynn Sutfin, public information officer for the Department of Health and Human Services.

The ads are meant to focus on individuals 14-21 years old as a group "that is vulnerable to health risks associated with marijuana use," she said. "The goal is to help discourage youth from using marijuana," Sutfin added.