Frita Batidos, which opened in October in downtown Detroit, is a fabulously reimagined version of the quintessentially American burger-fries-milkshake combo, Jane Slaughter of Metro Times writes. The owner promotes it as Cuban-inspired street food. 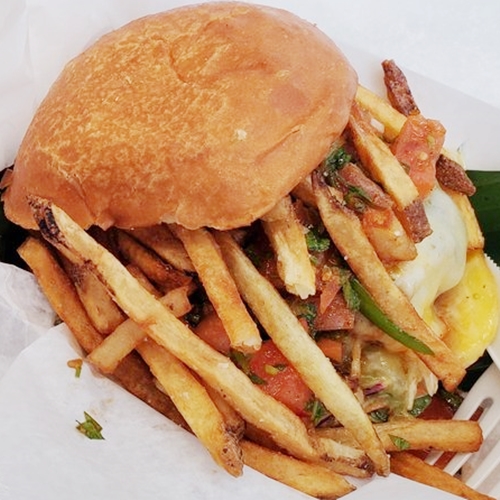 I'll say right off that I like my buns a lot firmer than the soft egg bun that Aronoff borrowed from Cuba. But if you like softies, or if you can get past the squishiness, as I did — you'll love the chorizo, chicken, black bean, beef, or fish burgers. Each is topped with sweet chile, lemon-scented or chipotle mayo, and a very generous heap of shoestrings under the top giant-sized bun.

The chorizo is made in-house with pork from Fairway Packing in Eastern Market, which manager Paterno Johnson extols for its humane practices. (It was Fairway meat that the Ann Arbor Frita Batidos used when it won the Burger Battle at Eastern Market two out of three years.) The restaurant adds chipotle purée, a chili blend, garlic, and red wine. Yet there's nothing at Frita Batidos for the timid palate to be wary of.

The first location opened in Ann Arbor in 2010. The new one is at 66 W. Colombia St. in The District Detroit neighborhood.