A new Michigan State flare-up has multiple ironies. It involves racial insensitivity right before Black History Month and happened at a building named for an African American couple -- Clifford and Dolores Wharton. 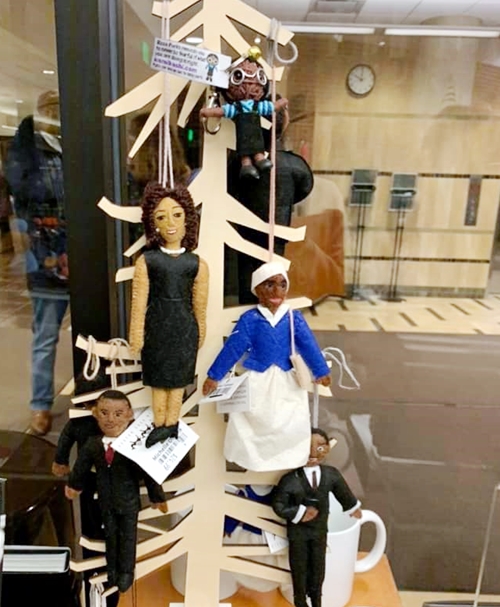 Pictures of a new sales display at the Wharton Center circulated across social media earlier this morning. It appeared to feature small dolls of prominent African Americans — like Michelle Obama, Diana Ross and Prince — hung by twine from a small wooden tree. And officials said they’ve since recognized their mistake.

A second hanging tree, shown below, had two African American dolls and two white ones dangling from branches in a suffragette tribute -- if that's the right word.

"Regardless of the intent of the display, its impact cannot be ignored. People were hurt and offended. We sincerely apologize to our community members and have immediately removed the display.

"We have work to do, and MSU remains committed to creating a culture that is inclusive and safe for all faculty, staff, students and visitors."

Gift shop staff and volunteers will get sensitivity training that "focuses on the impact and understanding of intentional and unintentional racial bias," adds spokeswoman Emily Gerkin Guerrant. 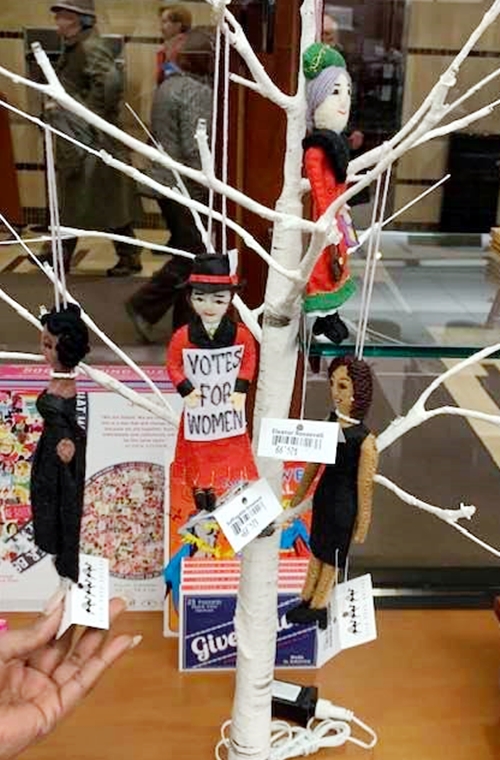 The arts center is named for a 92-year-old author and civic leader, Dolores Wharton, and her 93-year-old husband Clifford, MSU president from 1969-78 and the first African American leader of a major U.S. university.

Awareness of the unthinking display first was spread by Krystal Rose Davis-Dunn, a Detroit native studying social work at MSU and working as a public health advocate at Ingham County Health Department. "At the Wharton they are hanging prominent black figures from trees," she posted Thursdasy night on Facebook with the photo above. "What a way to honor Black History!"

My alma mater, Michigan State University has found an ugly manifestation [of cultural challenges] in one of our true gems. ... What would prompt anyone to such a racist act? ...

There are excuses, rationalizations, posturing that all ignore the truth. Those voices are not taking into account that silence, excuses or downplaying this behavior is exactly what is plaguing this nation at this very moment. ... This is not a moment of excuses. This moment tells me that ignorance is our enemy.

This is ignorance and it is violence normalized in American society. This not kids play, not a college prank. Much more than a training session [is needed]. This is about leadership across the board -- families, individuals, collective bodies, professionals, children and even foes. We need serious action to fight the ignorance of all, not just cherry-picked targets.

Here's a sampling of comments on Davis-Dunn's and Professor Taylor's Facebook pages: