Riverfront industrial properties and docks were an unchecked enforcement blind spot until recently, acknowledges the City of Detroit. It scrambled to change that after a waterside collapse at Detroit Bulk Storage Inc. sent construction aggretate into the river last fall.

Crain's Detroit Business follows up on what an inspection blitz found:

City of Detroit inspectors have found concerning seawall and waterfront conditions across the length of Detroit's riverfront after a dock collapse at a contaminated riverside site. ...

The city has inspected all 152 properties along the Detroit River in the wake of the aggregate spill near Historic Fort Wayne and issued about $195,000 in fines for more than 500 blight violations on five plots of land. The wave of inspections came amid environmental groups' calls for action. ...

"We're going to have to shore a lot of them up," [Mayor Mike] Duggan said of property along the city's waterfront. 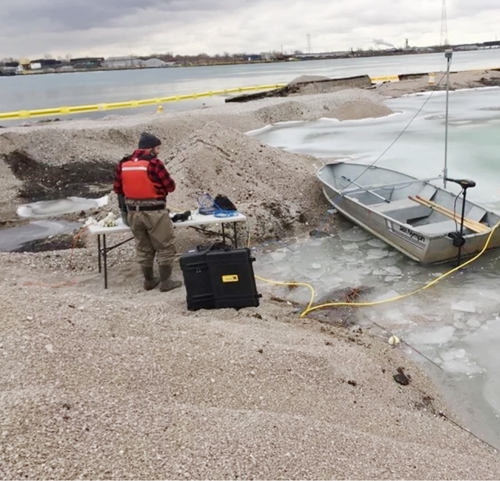 Businesses fined include the Roostertail event space on Marquette Drive.

They looked for sinkholes, erosion, seawall shifting, storage of heavy materials near the shore and other potential risks, Knight said.

As of [last] Thursday, BSEED had issued more than 500 tickets to five properties for property maintenance violations on coastal lots including unlawful storage of items outside commercial buildings, failure to maintain the premises, lack of certificate of compliance, unlawful occupancy of buildings and unsafe conditions.