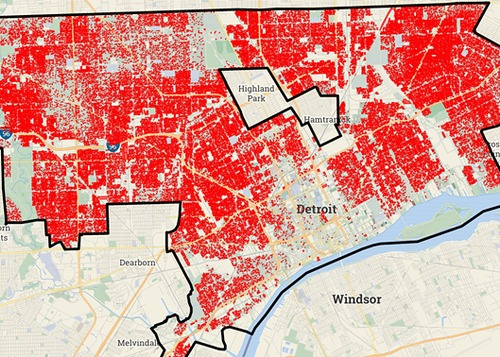 There's a double dose of good news for Detroiters who've either lost their homes to tax foreclosure or are on the brink of doing so. Low-income homeowners behind on their taxes are one step closer to debt relief thanks to the passage of a state Senate bill, and a just-filed class action lawsuit could bring additional aid for residents whose properties may have been overassessed.

We'll take these one at a time, starting with the suit. Filed in federal court Thursday, The Detroit News reports it targets the State Tax Commission, Wayne County and Detroit on behalf of residents who were issued “deficient” property tax notices in 2017.

"The city of Detroit has overassessed low-valued residential homes for years," [said a release from the Coalition for Property Tax Justice, which filed the suit with help from Chicago law firm Goldman Ismail Tomaselli Brennan & Baum LLP.] "Additionally, the city has at times failed to mail tax notices to owners in a timely fashion.

"The lawsuit specifically points to data showing that in 2017, all homeowners in Detroit were mailed their tax assessments too late to have a reasonable chance to file a tax appeal. This failure to timely mail tax notices violated homeowners' constitutional rights."

The suit seeks a halt on the foreclosure of properties that did not receive proper notice to appeal that year, as well as the chance for affected homeowners to appeal their assessments now and win damages.

In a statement Detroit assessor Alvin Horhn called the suit "frivolous," saying its claims could "be proven false with a simple Google search." He initially said the city issued the 2017 notices Jan. 24, a claim the city has since pulled back. It would not say what date the notices actually went out. It said the appeals period that year was extended by two weeks.

"This suit has nothing to do with concerns about over assessments in prior years. It refers only to 2017 and even the Detroit News analysis does not question the accuracy of our assessments beginning that year," the statement read in part.

Approximately one in three Detroit homes were tax-foreclosed in the past decade, in a crisis research shows was fueled in part by inflated property value assessments. Duggan launched a citywide property reappraisal when he came into office; it was completed in 2017.

The city was separately sued over tax foreclosures in 2017 by the ACLU, which alleged it made a poverty exemption too difficult to obtain. The city settled, promising to ease requirements and better advertise the program.

That poverty exemption is at the heart of the debt-relief bill that passed the state Senate Thursday. The so-called Pay As You Stay legislation, proposed by Detroit Rep. Wendell Byrd with support from local officials, would allow residents who've obtained the exemption to enroll in a payment plan to wipe much of their tax debts.

Versions of the bill passed the House and Senate by significant margins. They now must be reconciled before heading to Gov. Whitmer for approval. Residents will have until 2023 to enroll in the program.

Tens of thousands of Detroit properties are on payment plans for delinquent taxes. The Detroit News recently found that 90 percent of those were overassessed by the city. It reported a quarter were in deeper debt than when their payment plans began.