Reports: Detroit Automakers to shut down US plants 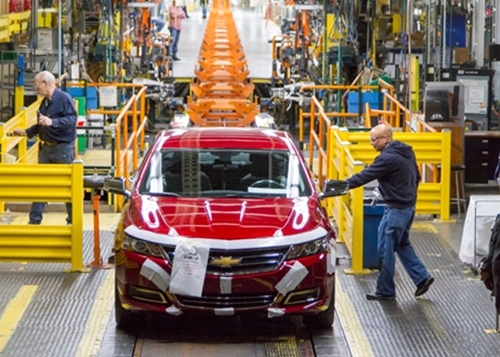 An employee at the GM Hamtramck Assembly Plant says autoworkers "feel like the band that keeps playing as the Titanic is sinking." (Photo: GM)

Detroit's three automakers have agreed to shut down U.S. plants, according to reports by the Detroit News and Free Press.

The move comes after two Michigan assembly workers tested positive for coronavirus. The automakers on Sunday rejected the UAW's demand that they halt operations for two weeks. On Tuesday night they agreed to partial rotating shut downs of plants to allow for cleaning between shifts.

GM said it will begin "a systematic orderly suspension of manufacturing operations in North America due to market conditions and to deep clean facilities and continue to protect people." The company said beginning Wednesday it will suspend operations in a cadence "with each facility receiving specific instructions from manufacturing leadership." The suspension will last until at least March 30. Production status will be reevaluated week-to-week after that.

Ford said it would close all North America plants Thursday night through March 30. Fiat-Chrysler had not issued a statement as of late Wednesday afternoon.

This is a developing story. More information coming.

Detroit's three automakers will partially shut down plants to mitigate the spread of coronavirus after hours of negotiations with the United Auto Workers union, which initially demanded a two-week halt of all operations.

The companies agreed Tuesday night to new measures to "increase adherence to CDC recommendations on social distancing in the workplace," the union said in a statement.

Most importantly, all three companies have agreed to review and implement the rotating partial shutdown of facilities, extensive deep cleaning of facility and equipment between shifts, extended periods between shifts, and extensive plans to avoid member contact. They will be working on shift rotation to minimize risk.

Further details on the changes were not immediately available.

Just before the new protocols were announced, it emerged that a worker at Fiat-Chrysler's Sterling Heights Assembly Plant had tested positive for the illness, marking the first COVID-19 case at a Michigan auto factory. The UAW confirmed the case for the Free Press Tuesday night and the automaker told the paper the employee had not been to work in over a week.

Researchers have said infection rates in the general population are much higher than the numbers show. Michigan suffers from a shortage of testing kits.

The company, which has closed its European factories, briefly closed the Sterling Heights plant overnight for cleaning. It tells the Free Press it's employing the following safety protocols:

UAW President Rory Gamble wrote in a letter to members Tuesday that the union made the request this week during talks with top leaders from GM, Ford and Fiat-Chrysler as part of a new COVID-19 task force.

The companies refused, asking for 48 hours to develop plans to ensure workers' health and safety. The deadline for those is 6 p.m. and Gamble says the union will "take this conversation to the next level" should it deem those plans insufficient.

No coronavirus cases have been reported in any of the automakers' Michigan factories, but employees say it's only a matter of time.

"People are stressed," said Sean Crawford, a worker at the GM assembly plant in Flint. "It’s the perfect environment when thousands of people are touching the same product down an assembly line. You could have a whole lot of people sick and a whole lot of families suffering as a result of this."

Jason Krzysiak, an electrician who works for Ford in Dearborn, says the company is being negligent.

They're putting "the production of vehicles before the health and safety of their employees," he said, noting that more than 4,000 workers were still on the job the Dearborn Truck Plant. "It really seems like they’re pushing exposure to really dangerous limits."

European automakers have shut down factories as a result of the outbreak.

The Detroit Three, meanwhile, have promised stepped-up cleaning protocols. Ford on Monday told the Free Press it's providing additional supplies of hand sanitizer and sanitizing wipes and encouraging social distancing at factories. GM is reportedly doing the same and has promised to slow production schedules to allow more time to clean parts.

White-collar employees at the auto companies are able to work remotely. On Tuesday, the companies announced that two such workers had contracted the virus — one at Ford Building 5 in Dearborn and one at the General Motors Tech Center in Warren. GM closed the engineering building for cleaning, but said it would reopen by the end of the day. Ford did not close the building where the employee who tested positive works, saying they were exposed off-site and hadn't been back since.

Gov. Gretchen Whitmer has left the decision of factory closures up to the automakers themselves, instead forcing shutdowns of smaller businesses where people gather — like bars, restaurants, gyms and spas. Gamble, in his letter, said Whitmer was instrumental in bringing automakers to the table to discuss how to mitigate the spread of the virus.

The CDC recommends that no more than 10 people gather at a time and that they maintain a distance of six feet. Whitmer has limited gatherings to a maximum 50 people and has also advised six-feet of distance.

A local infectious disease specialist told Deadline Detroit Tuesday that Michigan should be put on lockdown to prevent further spread of the virus. Without extreme interventions, Dr. Teena Chopra, of Wayne State University, said it could be about two months before the number of cases in the state begins to recede.

Michael Mucci, of GM's Detroit-Hamtramck plant, says the company "should do the right thing and send us home for two weeks."

"We feel like the band that keeps playing as the Titanic is sinking," said Mucci. "We feel like we are going to be a high risk to the rest of our family who are scared and home."

“It’s all about money, it always has been," he said. "Even in the very beginning — before we had the right to organize unions — people would get their limbs crushed or caught up in the chain on the assembly line and ... they would just drag their bloody body off the line and keep it moving.

"There's a long history of total disregard for the health and safety of workers because, at the end of the day, we're just tools.”

Automakers on the COVID-19 task force on Sunday reportedly promised to work on ways to enhance social distancing in factories and implement health and safety education as well as screenings.

GM also specifically noted it will offer COVID-19 lab testing and treatment plans. Further, the automaker will work with its GM Medical unit to isolate suspected cases "when necessary."

Ford, meanwhile, said it would close a facility for 24 hours to disinfect if an employee tests positive for the COVID-19 coronavirus. If three cases are confirmed in one facility, it will close it indefinitely "so its status can be assessed and rectified," the automaker told the Free Press.

Ford is offering unpaid time off to workers concerned about contracting the virus, Krzysiak said. But he says that puts workers, many of whom live paycheck to paycheck, "between a rock and a devastating boulder."