It's hard to imagine two assembly-line products more dissimilar than a car and a respirator. But in a callback to Arsenal of Democracy days, two Detroit automakers say they are evaluating how the companies might pivot to making medical-grade respirators, or ventilators, to see the world through the COVID-19 crisis. 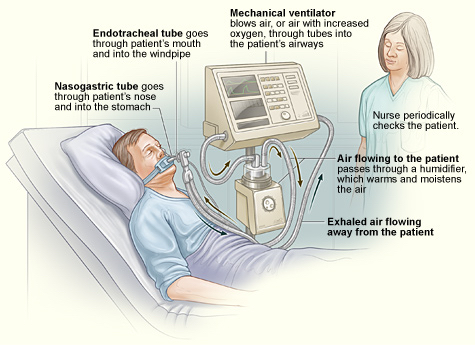 How a ventilator works. (Wikipedia illustration)

After announcing they both will temporarily suspend production amid coronavirus concerns, General Motors Co. and Ford Motor Co. confirmed Wednesday that they have been in contact with governments in the United States and United Kingdom about evaluating ways to produce the ventilators experts say doctors are expected to need to treat seriously ill coronavirus patients.

"Mary Barra was in contact with the administration today to provide an update on the decision to suspend production," GM spokesman Jeannine Ginivan said in a statement confirming discussions between the company and the Trump administration.

"She also indicated GM is working to help find solutions for the nation during this difficult time and has offered to help, and we are already studying how we can potentially support production of medical equipment like ventilators."

There's a lot of wiggle room in those statements -- "potentially," "support," "evaluating," etc. -- and even a nodding familiarity with manufacturing means such a project would require massive retooling, training and other details, but bless 'em anyway. If nothing else, it'll keep the companies on the right side of the president.

The nation, and the world, is generally acknowledged to be short of respirators, machines that keep patients breathing in intensive care. COVID-19 has left hospitals overwhelmed with patients needing mechanical help to breathe. In Italy, doctors have had to employ an agonizing form of triage, prioritizing younger patients, with a greater chance of living a longer life, over older ones reaching the end of their natural lifespan.

Detroit's automakers and line workers are justly proud of their work during World War II, when the factories were converted to produce planes, tanks and other vehicles for the war effort, earning the city the title "arsenal of democracy."