The author is a Metro Detroit freelance writer who misses March Madness. 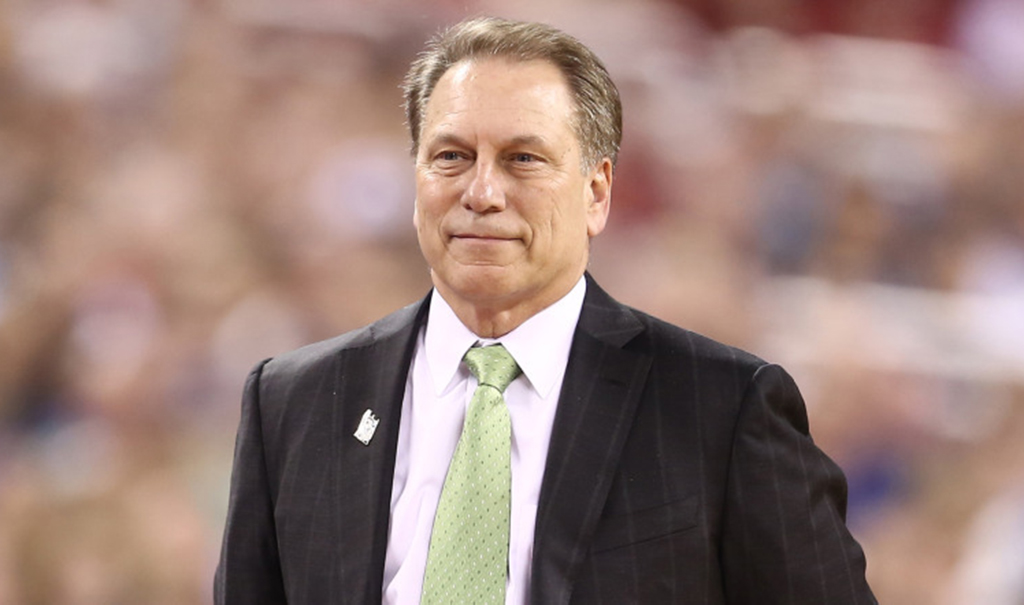 The 2019-20 Michigan State Spartans began their championship quest in November with a choppy loss to Kentucky then found their footing at just the right time in March. They took down Iowa, then handled Maryland and Penn State on the road before dismissing Ohio State in program legend Cassius Winston’s final game in East Lansing.

The green and white train was at full speed entering the conference tournament before the whole world came to a halt.

How would this season have concluded? Would Tom Izzo have captured that elusive second championship? Would Winston have had his Kemba Walker moment, putting an entire roster on his back with a torrid run through the NCAA bracket?

We’ll never know for certain. But that doesn’t mean we can’t have a little fun pretending.

Let’s imagine an alternate reality where the 2020 Big Dance still took place, an actual on-court champion was crowned and Jim Nantz made us all worry about a potentially cringeworthy pun to close our country’s most exciting sporting event.

Round of 64, Rocket Mortgage FieldHouse, Cleveland
No. 3 Michigan State vs. No. 14 Northern Illinois

The NCAA has always claimed they don’t intentionally engineer those juicy first-round games matching up a pupil against a mentor, or a legendary coach facing his former school. So it’s apparently just a coincidence that Izzo drew longtime assistant Mark Montgomery and the NIU Huskies in the tournament opener. Montgomery coached under Izzo for a decade in East Lansing and this year fielded his best squad during nine years in DeKalb.

The MAC West co-champion, led by dynamic guard Eugene German, pose a real threat to heavily-favored MSU early. The Huskies burst out of the gate and lead by a dozen at the under-12 timeout in the first half. But the rapid start proves to be a mirage. The physical Spartans slowly whittle away at the double-digit lead and by halftime, own a six-point advantage. The second half is more of the same and Xavier Tillman finishes with 23 points and 14 rebounds. Winston scores just nine, but picks up 11 assists in a very business-like beginning to the tournament run.

Round of 32, Rocket Mortgage FieldHouse, Cleveland
No. 3 Michigan State vs. No. 11 Saint Mary’s

A little bit of bracket luck finds its way to Michigan State as the underseeded No. 6 Louisville Cardinals are upset in the opener by the Gaels out of the West Coast Conference. But the road is anything but easy as Saint Mary’s employs the services of point guard Jordan Ford, a Steve Nash-like maestro with the ball and one of the most explosive guards in the country. 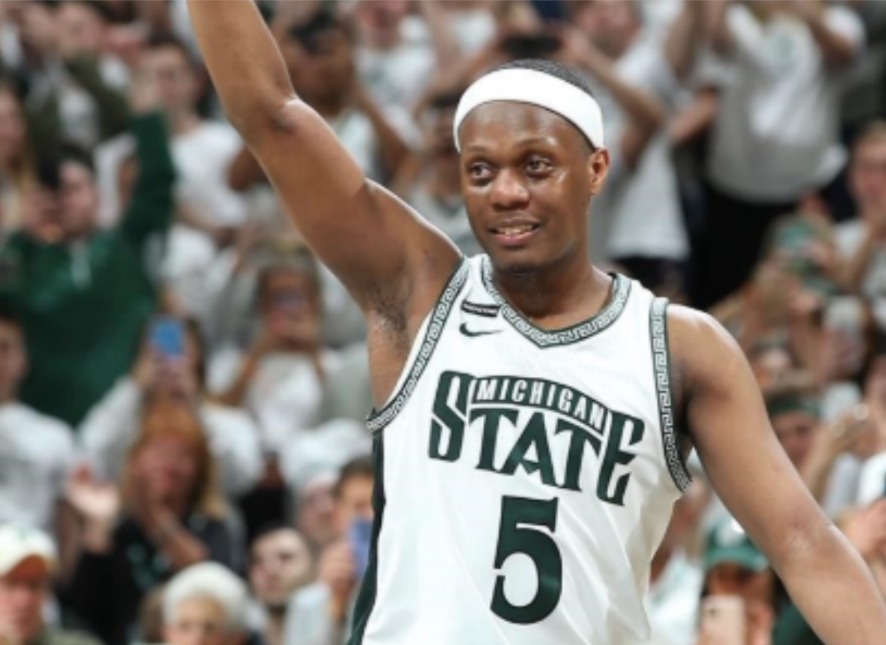 But Izzo isn’t about to let Ford go off for 37 like he did in the opening round. He assigns 6’6” Aaron Henry to hound the 6’1” Ford all over the floor and the All-American becomes frustrated. The Saint Mary’s star winds up with 27 points, but connects on just 7 of 24 from the field.

The national belief in the Spartans as a legitimate title contender grows with a second straight easy win.

Big Blue Nation enters this matchup as one of the country’s hottest teams. John Calipari’s group won nine of 10 to close the regular season then steamrolled the field in the SEC tournament. The Spartan faithful travel well to Indy, but it still feels like a pseudo-road affair with the giant swarm of Kentucky loyalists packing the arena.

Things begin as poorly as could be. The notoriously streaky Wildcats come out firing. They somehow drain six triples in a row out of the gate and lead 25-10. Winston picks up a second foul with 14 minutes still to go in the first half and Izzo is apoplectic on the sidelines.

In the NCAA tournament, however, you come to always expect the unexpected. Little-known Foster Loyer (2.9 PPG) of Clarkston enters the game for Winston and proceeds to have his “Spike Albrecht” moment at the most critical time. Loyer buries a deep 3, gets a breakaway layup, then hits another 3 while being fouled. After yet another triple, this one from the edge of the midcourt logo, Bill Raftery screams, “The Loyer rests his case!”

The game is knotted at the half and a completely fresh Winston drives the ship home. Malik Hall registers an unlikely double-double (11 points, 10 boards) and Michigan State is halfway to the championship.

The earlier good fortune with the bracket has vanished and MSU must now navigate through the ultimate Group of Death. Kansas struts to the Lucas Oil floor carrying a 21-game winning streak and all the confidence in the world.

Towering center and Big 12 player of the year Udoka Azubuike wages a war on the inside with Tillman. Devon Dotson is one of the nation’s quickest guards, but Winston and Rocket Watts team up to slow him down. The game was viewed as a toss-up by the talking heads and it plays out true to form.

With less than a minute to go, neither team has held a lead of more than six. The Spartans trail by three when Gabe Brown connects for just his second deep ball of the tournament. Bill Self screams for a timeout but Dotson (and the officials) ignore his pleadings and Watts manages to poke the ball free. Winston grabs the loose ball and has just enough time for an awkward runner from just inside the foul line. He shoots it too hard, but the backboard turns out to be Michigan State’s best friend as the ball caroms off the glass, catches the front rim and curls back in.

It’s pure bedlam. A Spartan dog-pile forms under the hoop while Izzo offers Self an almost apologetic handshake for the gut-wrenching way his Jayhawks were just bounced from the bracket.

Four wins down, two to go.

This Big Ten heavyweight clash gets its well-deserved rubber match. The Spartans and Terps shared the regular-season title (along with Wisconsin) and both squads have played top-shelf basketball to this point.

Future lottery pick Jalen Smith averaged 18.5 points and 11 boards against Izzo’s squad during the regular season. He told reporters leading up to the game, “Prepare to double that on Saturday night.”

Michigan State gets a pregame pep talk from Draymond Green. CBS is only able to air the final few seconds of the speech when Green shouts, “LET’S GO!” The rest appears to be very much NSFW.

Senior floor generals Anthony Cowan Jr. and Winston go at one another every time down the court. Raftery yelps, “These two belong in the squared circle, Jim!” They each score 12 in the first half, but Winston gets the better support and MSU heads to the break with a four-point lead.

Henry soars for an alley-oop to open the second half, a brilliant opening call from Izzo and pinpoint direction from the CBS truck when we are hit with an immediate reaction shot from a delighted Morris Peterson. “That’s my play! That’s my play!” he shouts at fellow Spartan national champion (2000) Charlie Bell.

It’s a green and white barrage from there. Tillman swats a Smith layup into the fifth row. Watts sinks five 3s for a tournament-high 22 points. Steven Izzo even sees the floor, but doesn’t attempt a shot, much to the chagrin of a vocal Spartans contingent. The Spartans instead take a shot clock violation in the final minute, which is only right holding a healthy 26-point advantage.

One Shining Moment is just 48 hours away.

Coming into the season, most considered this to be one of Jay Wright’s lighter squads at Villanova. He was set to start three underclassmen and no seniors. But of late, even-numbered years have been exclusive possession of the Wildcats. ‘Nova cut down the nets in 2016 (Kris Jenkins at the buzzer) and 2018 (Donte DiVincenzo singlehandedly destroys Michigan).

Villanova arrives to the final game with five tourney wins by a combined 12 points. They’ve been anything but world-beaters, but steady junior Collin Gillespie and future star Justin Moore have carried the load and they’ve returned to the sport’s biggest stage.

From the outset, it feels like Michigan State’s night. Winston, Henry and Watts are torching the Villanova zone. When they come out of it, Tillman muscles inside for a jam. Kyle Ahrens gets in on the act with a 3 and fast-break slam. But the Wildcats have championship spirit and finish the half on a 10-2 run to slice MSU’s lead in half, 38-30.

As the final 20 minutes play out, it becomes clear that Villanova’s slew of tournament squeakers are now catching up. The Wildcats use only six or seven guys most nights and Izzo’s group looks like they could begin another full bracket run tomorrow.

Things never get completely out of hand, but the lead sits comfortably between 10-16 the rest of the way. When Izzo inserts Jack Hoiberg for Winston with 90 seconds to go, the coach and point guard embrace on the sidelines for nearly a minute. It’s Izzo’s second national title after 20 years of coming up just short and for Winston, it is an almost surreal finish to what has been the most emotional period of his life.

As the final seconds tick down, Nantz bellows, “For Tom Izzo, number two is oh so sweet! The Michigan State Spartans are your 2020 national champions!”

Winston grabs Most Outstanding Player honors with 40 points and 15 assists in his final two collegiate games.

On the podium after the game, Izzo tells Nantz through tears, “Cassius is the toughest kid I’ve had in my 43 years of coaching. He was not going to let us lose tonight.”