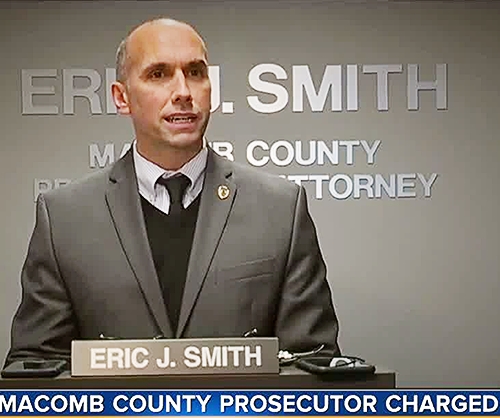 Much like a reckless poker player who eventually loses it all, Prosecutor Eric Smith stands accused of shameless cheating, becoming part of Macomb County’s four-of-a-kind who’ve faced criminal charges for betraying the taxpayers.

Among those who have held one of the five specified countywide elective offices in Macomb -- prosecutor, sheriff, clerk, treasurer and public works commissioner -- Smith stands as the fourth to face possible time behind bars after 10 criminal charges were handed down Tuesday.

This is not petty stuff. The prosecutor, supposed to serve as the top lawman in the county, is accused of Mafia-style misdeeds such as conducting a criminal enterprise, along with five counts of embezzlement and one count of tampering with evidence.

The Macomb Township Democrat is looking at up to 20 years in prison for allegedly operating an off-the-books “slush fund” from which Smith may have illegally used up to $1.8 million from financial penalties imposed on drug dealers and drunken drivers.

As a longtime county resident, I can only imagine the dismay Macomb folks feel over the continuing laundry list of felons and lawbreakers and scammers who've had public positions in our community.

Macomb’s four of a kind

In addition to Smith, the four of a kind I’ve singled out include former sheriff Bill Hackel, who served time for rape; ex-clerk Karen Spranger, who was removed from office by a judge after a series of controversies and bizarre behavior and now faces charges of stealing nearly $1,700 from a 78-year-old woman; and former treasurer Derek Miller.

Now serving as Smith’s chief of operations, Miller also was indicted Tuesday by the Michigan Attorney General’s Office for conspiracy and some minor offenses. It remains to be seen if Miller will face allegations in court that, while serving as treasurer four years ago, he looked the other way while Smith allegedly established an elaborate spending scheme.

In Macomb, we’ve had corrupt judges, school superintendents, city council and township board members, trash company executives, a millionaire businessman with government ties, and government contractors such as engineers and attorneys, but I suspect few counties anywhere can say that they have achieved our version of four of a kind. Add in the remaining wild card, former public works commissioner Tony Marrocco, and the county may make it five of a kind.

According to the Macomb Daily, the FBI’s ongoing corruption investigations uncovered allegations that Marrocco was regularly taking $5,000 bribes from the owner of an engineering firm. Known for many years as a kingmaker, “the godfather” of Macomb County politics, Marrocco lost his bid for re-election in 2016.

While Marrocco has not been charged, his right hand man at the public works office, Dino Bucci, is reportedly working with federal authorities on a deal that would reduce his sentence on multiple corruption convictions in exchange for sharing damaging information on his former boss.

As for Smith, 53, his repeated claims of innocence will be decided by a jury. But the mounds of evidence seem fairly strong.

The fund he was tapping, by law, can be spent only on law enforcement or assisting crime victims. In contrast, the copies of checks and other financial documents seized by the FBI show the prosecutor used some funds to ingratiate himself, such as $160,000 on a security system for his elaborate home, and to pay for gatherings of his friends and supporters, such as the $775 he dished out at a coffee house known as Cappuccino Man.

Investigators focused on roughly $600,000 that appeared to be illegally spent since 2012, Attorney General Dana Nessel said.

The embezzlement charges also indicate that Smith used many thousands of dollars to boost his reputation in the county. So, unless he can convince a jury that cash taken from the fund and given to the Kiwanis Club and local Catholic churches consists of law enforcement activities, his story may not hold up.

As late as Monday night, Smith claimed that news reports of impending indictments against him had been “proven inaccurate.” He also tried to change the subject, talking about the coronavirus outbreak and how he is focused “during these extremely trying times” on public health and safety.

Of course, Macomb County residents have heard it all in recent years. One official who was nabbed for bribery, former Clinton Township trustee Dean Reynolds, pleaded for mercy from the court, saying that he suffered from advanced cancer and his mother was in hospice. It was soon learned that it was all a scam: He wasn’t sick and his mother wasn’t on her death bed.

Last year, a federal prosecutor indicated that the flurry of arrests in the county starting in 2016-17 -- at least 23, now that Smith is added to the list -- could place Macomb and southeast Michigan as one of the most corrupt areas in the nation. The problem, he said, was that corruption had become a “generational, systemic part of the culture” here.

If these latest revelations prove true, consider this: Imagine having a prosecutor with a mobster mentality.

Then again, in Macomb County, it's not so hard to imagine.