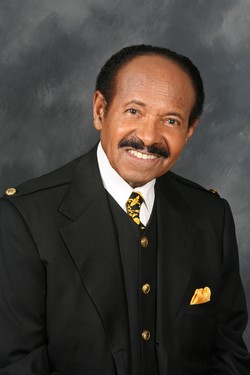 The founder of the Swanson Funeral Homes, O’Neil D. Swanson, whose name became synonomous with the Detroit funeral business, passed on Friday at age 86. The cause of death was not released.

For decades the funeral home served the African American community in Detroit. Last year, it oversaw arrangements for the services of Aretha Franklin.

“Today, with the passing of O’Neil Swanson, the Detroit community lost a legend and an icon," Hiram E. Jackson, CEO of Real Times Media, tells the Michigan Chronicle. "I lost a beloved mentor, partner, and friend. But, most importantly, the Swanson family lost their patriarch. And to them, I am sending my deepest, heartfelt condolences and prayers for comfort."

“For more than 60 years, O’Neil provided a refuge for families across Detroit in their darkest hours."

Swanson was born in Birmingham, Ala. and moved at an early age to Dayton Ohio, where he attended school and graduated as a member of the National Honor Society from the Paul Lawrence Dunbar High School, according to the funeral home's website.

In June 1953, he graduated from Central State University in Wilberforce, Ohio, and from 1953 through 1955, he  served in the military, rising to the rank of first lieutenant. In 1956, he graduated from the Cincinnati College of Mortuary Science.

"Whether you were a millionaire or person who was struggling, O'Neil D. Swanson made sure that if your body was with his funeral you were going to get top of the line service no matter who you were or where you came from," Mario Morrow Sr. of Mario Morrow & Associates public relations firm, tells The Detroit News.

Economist Karl Gregory, professor emeritus of Oakland University's School of Business Administration, tells the News that  Swanson was "iconic in our community.

"He was a business leader and he supported a lot of charitable organizations and businesses. He invested in black businesses."

"O'Neil Swanson was a gentle soul who cared deeply about Detroit and the challenges facing African Americans. In many ways he represented the spirit and struggles of the community but never wavered in his commitment to supporting and cultivating good leadership, black owned businesses and families. He will be sorely missed - especially in a time when we are all striving to care and comfort for one another during this pandemic where Detroit is being hit the hardest."