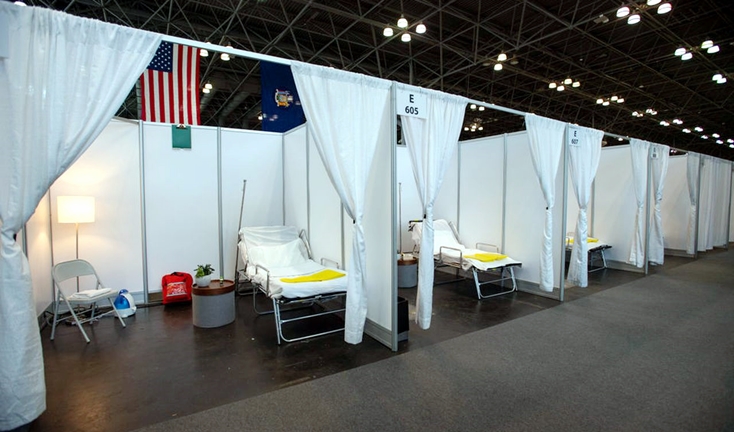 Detroit's overflow medical facility will have 900 cubicles like these at a Manhattan convention hall.
(Photos: Greg Vigliotti/Army Corps of Engineers)

Detroit's convention center has the look and feel of a military operations center this week as Army engineers in camouflage uniforms, safety vests and hard hats oversee setup for a two-floor impromptu hospital.

Critical care begins by mid-April where concept cars would've been displayed in June.

Seriously ill coronavirus patients will be on one floor and less severe victims will be treated on another level.

The FEMA-financed buildout "will take a couple of weeks at most," public affairs specialist Lynn M. Rose tells the Freep. "They have to award contracts. We're working on getting a contractor, getting supplies and making sure we have everything we need." 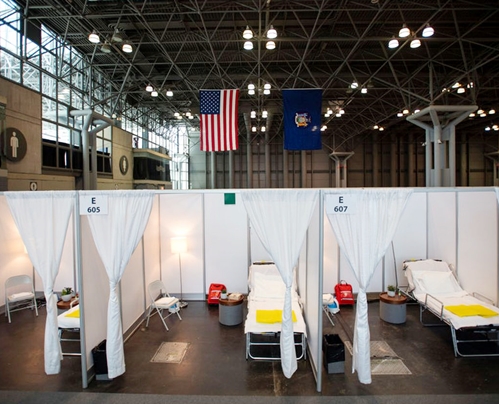 The lightweight, foldable beds resembling cots arrived on 108 trucks from Army hospitals at Fort Campbell, Ky., and Fort Hood, Texas, media coverage says. Each is in a numbered "pod" with curtained sides, a lamp, low table and chair.

The stark scene resembles a disaster shelter or indoor campground.

Medical personnel from FEMA and the two Army hospitals will provide care whenever patients are transferred to the emergency backup center. "They're well-trained. … They're prepared to deploy in a moment's notice, which is exactly what they did and they are going to make a huge impact," Maj. Gen. Brian Winski, commander the 101st Airborne Division, tells ABC News.

The deployment will likely be "a matter of months, not weeks," he adds.

New York City has 33,474 cases as of Sunday, so Gov. Andrew Cuomo hopes to have field hospitals in each of the five boroughs, as well as four suburban counties. Prospective sites include a cruise ship terminal, a horse track and an expo center.

New York has at least 59,513 coronavirus patients, the most of any state. Michigan ranks fourth with 6,498 in the latest daily tally.