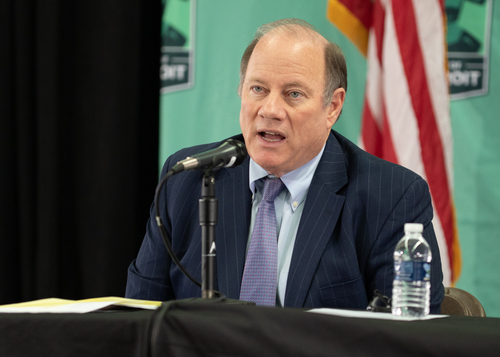 The city of Detroit will provide $3.1 million in grants to small businesses hurt by the coronavirus outbreak, Detroit Mayor Mike Duggan annouced in a Monday media briefing.

Approved businesses will receive grants of $2,500 and $10,000 to help cover costs including payroll, rent, mortgage payments and utility bills. Those with fewer than 50 employees and less than $1 million in annual revenues can apply beginning tomorrow on the Detroit Economic Growth Corporation's website.

"We want to direct the money to the places where it can give them a lasting amount of impact to sustain in these devasting economic times that we're in," said Detroit Economic Growth Corporation Chief Executive Officer Kevin Johnson. Checks are to begin going out in two weeks.

Detroit businesses could be shut for months as coronavirus cases continue to surge in the hard-hit city. Detroit climbed to 2,086 confirmed cases Tuesday, and its death toll rose to 73, nearly a 50 percent over the day before.

Additional field hospitals beyond the 900-bed site in the TCF Center could be set up to accomodate the surge in patients, Duggan said. The Army Corp of Engineers is scouting at least a dozen possible locations.

A view inside Detroit’s TCF Center, which annually hosts the North American International Auto Show, as it’s being converted into a temporary overflow hospital for 1,000 #COVID19 patients. @detroitnews pic.twitter.com/tzuKZUO64C

"They have my support, whatever building they want, whatever site they want, if they believe it's the right thing for this community, I'm on board," he said.

“This is a game-changer for the country,” Duggan said of the new tests, noting that until now coronavirus could only be detected in individuals already showing symptoms. “Four and five days (after exposure) is four and five days when people are out there not knowing.”

Detroit police, fire, EMS workers and bus drivers will be eligible for the expedited testing. Abbott is also expected to partner with southeastern Michigan hospitals.

The Detroit Police Department has been particularly hard hit by the spread of the virus, with approximately 600 members under quarantine, the majority of them officers. Two members, a captain and 9-1-1 dispatcher, have died and 76 are confirmed positive, including Chief James Craig.

Duggan says he's now turning his focus to ensuring every Detroiter who needs a test can get one. The city has compiled a publicly available list of Detroit doctors and clinics who can refer insured and uninsured patients for testing. It's also in the process of recruiting transportation companies to drive patients to testing sites. TCF Bank on Sunday committed $100,000 toward that goal, Duggan said.

Separately, eight members of the Detroit Fire Department have tested positive for coronavirus and 109 have been brought back to work.

Police, firefighters, and EMTs are being prioritized for testing at the State Fair grounds Tuesday and Wednesday and are eligible for free hotel rooms donated by Greektown Casino. The rooms are reserved for workers with high-risk family members at home.

The city is to begin testing a backlog of bus drivers for coronavirus Thursday.