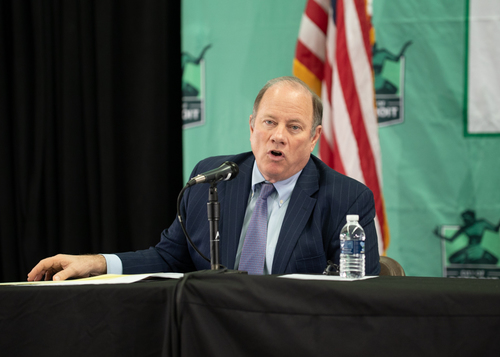 Duggan at a media briefing Tuesday.

Detroit will step up police enforcement of a statewide stay-at-home order and could move to shut down city parks if residents don't stop gathering in groups, Mayor Mike Duggan warned in a Friday news conference.

As of Tuesday morning, police had issued at least 7 citations for violations of the order, a department spokeswoman told Deadline Detroit. The penalty for the misdemeanor violation was boosted by the state Thursday, from $500 to $1,000.

"If you haven't seen what's going on in New York City today, it is our future if we don't change our behavior," Duggan said. "They've lost 1,500 people in New York City; they're predicting it's going to be 3,000 in three days."

Confirmed coronavirus cases in Detroit shot up Friday, to 3,572 from 2,860 the day before. The city's death toll climbed to 116.

"I don’t know if we can bend the curve in Detroit," Duggan later added. "They failed to do it in New York."

Gov. Gretchen Whitmer's executive order bars people from leaving home except for activities like essential labor, grocery shopping, hospital visits and outdoor recreation that can be performed six feet away from others.

Duggan left open the possibility for a curfew to help enforce the social distancing rules, though said the city is seeing as many violations in the day as it is at night. A 9 p.m. curfew was imposed this week in Flint.

They're also urging residents who see the order being violated to call their local police precinct. That information can be found on the city's website.

Detroit police have issued citations at Rouge Park — where several hundred people gathered last week in an incident that prompted police to shut down the park early — and at a gas station at Van Dyke and Gratiot, where someone was allegedly harassing and getting too close to customers. Police were unable to provide details on the other incidents.

The city's basketball courts have also been a popular gathering spot, resulting in the city's removal of hoops at 19 locations.

Detroit's health director also warned of people gathering too closely at grocery and party stores, and called on business owners to keep patrons 6-feet apart, as the governor's order requires.

Duggan additionally urged residents to start covering their faces with masks or scarfs when out, particularly when in enclosed areas like city buses. He said he'd work with Whitmer to get more masks to the state.