Rev. Charles C. Adams of Detroit: "We as individuals will be stronger for having gone through this."
(Photo: Hartford Memorial Baptist Church)

Everything is changed, including Holy Week observances in Metro Detroit and elsewhere. No churches will bless and distribute palms today on Palm Sunday, for instance, because worshipers have to stay home and handing out greens others have touched could spread that virus.

Instead, Masses will be livestreamed, as they have been since mid-March.

"This is not the Lent I would have planned, and this is not the Lent you have expected. But by God’s providence, it's the Lent He gives us," Catholic Archbishop Allen H. Vigneron said in his homily last Sunday, streamed from an empty Cathedral of the Most Blessed Sacrament on Woodward near Chicago Boulevard in Detroit. 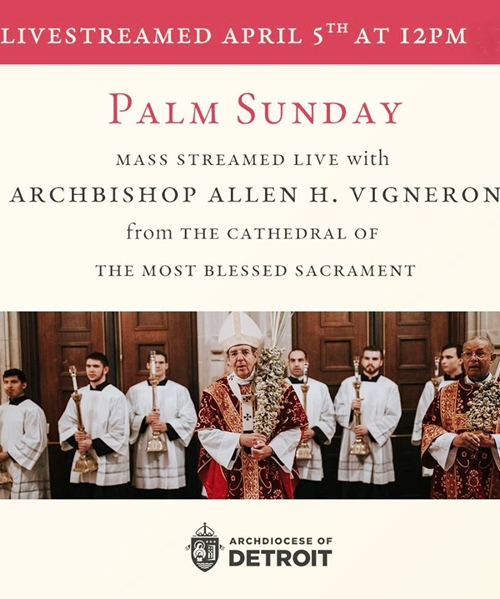 He commended doctors, nurses, law enforcers and other first responders for doing all they can to serve in a time of crisis, according to Detroit Catholic, an archdiocese publication.

Vigneron will preside there at noon today, streamed live here, on Facebook and on Fox 2.

That's just part of the archdiocese's pre-Easter online menu during what it calls Passiontide, when Catholic churches recount the events leading up to and through the crucifixion, death and resurrection of Jesus Christ.

"As the Archdiocese of Detroit enters a Holy Week unlike any in living memory, the faithful are being invited to take part in a unique, four-part digital mission to grow in faith and holiness during the time of a pandemic," the Detroit Catholic says in another post.

Here are details for talks by four local priests at 7 p.m. today, Tuesday, Wednesday and Good Friday, plus liturgies from the cathedral.

The archbishop's Easter Mass starts at 11 a.m. next Sunday. Two dozen parish masses also will be livestreamed from 7:45 a.m. to noon from churches around Detroit and the three metro counties. They're listed here.

In a recent message to congregants, he expresses optimism that "the United States will emerge from this with a deeper commitment to 'liberty and justice for all.'"

Our communities will stand together as one across lines of race, class and any other wall that divides us. Our homes will be closer now that we do not have the distractions of our daily lives. We as individuals will be stronger for having gone through this. ...

Most of all, we will hunger and thirst all the more for the presence of God.