Gallery: Inside the 1-week flip from Detroit convention hall to 1,000-bed hospital

Deploying and furnishing a pandemic backup hospital on two levels of TCF Center is moving along with military precision.

The Federal Emergency Management Agency calls it a "temporary alternative care facility," aka field hospital to those who don't use government jargon. (At least it's not dubbed a TACF for short in news releases, so there's that.) 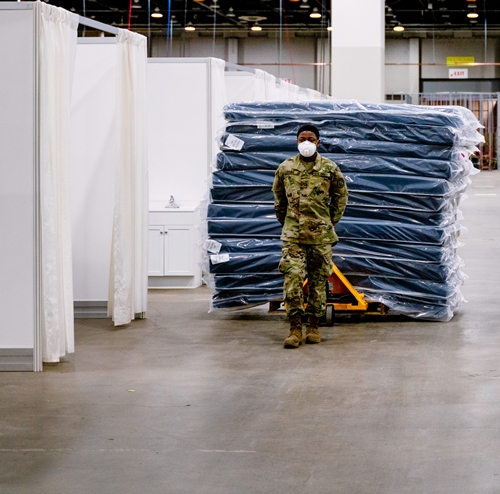 This guardsman is on mattress delivery duty.

On Saturday and Sunday, women and men from the Michigan National Guard unpacked, assembled and distributed motorized hospital bed frames to some of the 1,000 patient "pods," as the single-occupancy curtained areas are called. Mattresses then were added, as shown at right. Portable nursing stations were postioned in outside the treatment rows.

The rush-job medical facility is expected to be ready Friday, according to the Army Corps' local district, led by Lt. Col. Greg Turner. It's not clear yet who'll provide care, which is supplied by Army and U.S. Public Health Service teams at a similar setup in New York.

A sense of what to expect at the exhibition hall alongside the Detroit River comes from a Washington Post visit to the Javits Convention Center next to the Husdon River on Manhattan's west side. It also had 1,000 beds ready in a week, and is expanding to 4,000 for the hard-hit city.

There's a pharmacy in a concession stand and 50 mobile showers.

Reporter Jada Yuan was given a face mask and other protective gear before entering New York's site.

As of Saturday evening, the [center] had 40 patients. ... "Attention all personnel, remember to maintain six feet of separation to prevent the spread of the virus. Thank you," blared an announcement scheduled to go off every hour. ...

The total National Guard presence is around 400. Overall, the total number of people on site fluctuates between 1,000 and 1,500. ... The health care portion of the operation comprises medical experts from the Army and the U.S. Public Health Service. ...

[A security team] is using only two of the building’s 225 perimeter doors — with the help of the New York City police, the New York State police and the National Guard. Already, they’ve had patients who’ve tried to walk in through the front door — seeking a coronavirus test or trying to get admitted — rather than first seeking transfer from a hospital. ...

Other convention centers in Detroit and Miami have been calling for advice — how do you build a hospital in a place that wasn’t designed for it? 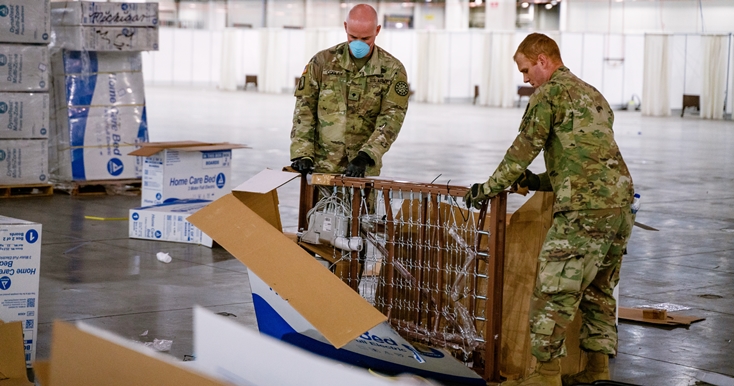 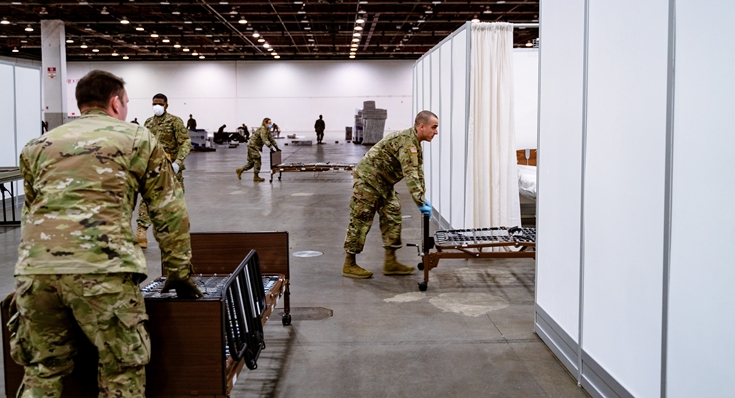