The state's latest figures show 1,749 more patients diagnosed with Covid in the past day, the biggest single-day jump since counting began. 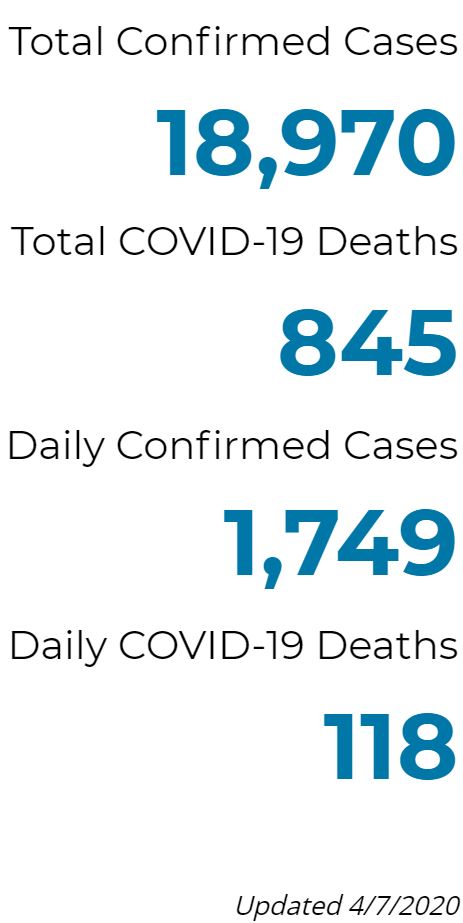 New national attention suddenly focuses on a racial disparity in the toll that Deadline Detroit columnist Greg Bowens wrote about last Thursday. Among patients whose race is known, blacks make up 40% of Michigan deaths and 33% of positive diagnoses, compared to 23% of cases and 29% of deaths for whites.

About 79% of Detroiters are black. Statewide, the figure is 14 percent.

"Social distancing is harder when you live in a smaller space because you have less income and we know that, for historical reasons, the African American community in Michigan has significantly lower incomes," he said. 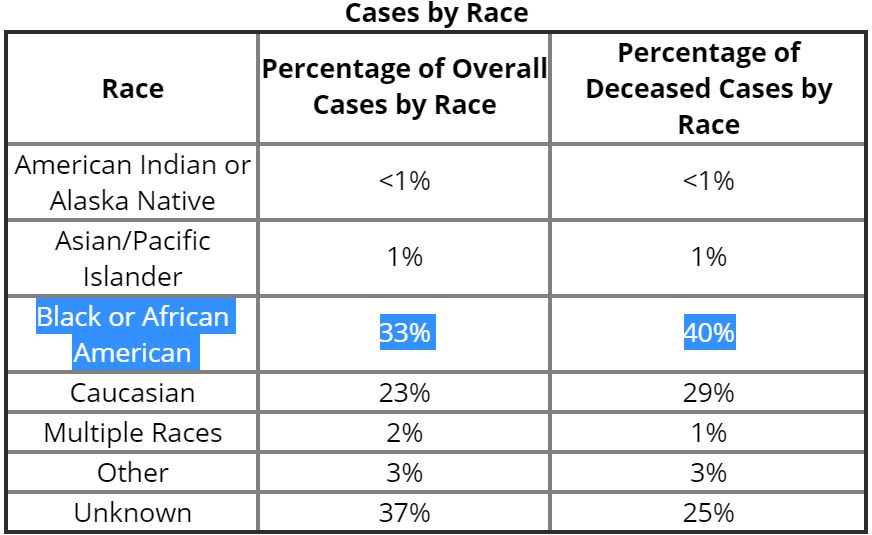 The race gap is the topic of articles Tuesday in The New York Times, NBC News Digital and even Teen Vogue. The first two mention Michigan because its health department is among the relatively few posting demographic breakdowns. “Day by day, the emerging statistics show black residents being infected at disturbing rates in some of the nation’s largest cities and states,” says The Times.

The racial disparities in coronavirus cases and outcomes, public health researchers said, reflect what happens when a viral pandemic is layered on top of entrenched inequalities.

The data emerging in some places, researchers said, is partly explained by factors that could make black Americans more vulnerable in any outbreak: They are less likely to be insured, more likely to have existing health conditions and, as a result of implicit racial bias, more likely to be denied testing and treatment. And then, the researchers said, there is the highly infectious nature of the coronavirus in a society where black Americans disproportionately hold jobs that do not allow them to stay at home. …

In Detroit, the Rev. Larry Simmons said: “We see the same thing we always see: There’s a fundamental inequity in America, and this crisis of corona has just revealed it.”

In Michigan’s daily figures, not everyone counted is in critical shape or even still sick. The rolling tally since the third week of March doesn’t reflect recovered and discharged patients.

Tuesday’s overall count from the Department of Health and Human Services includes 15,195 patients from Detroit and its surrounding three counties (80% of the total).

Here are confirmed virus cases and deaths in suburban counties:

Danger on the front lines

War metaphors for the Covid fight are apt, though perhaps overused. Still, it's hard not to think of medical warriors as endangered soldiers now that Beaumont Health follows Henry Ford Health System with stark news about its staff.

About 500 nurses and 1,000 other Beaumont employees are off the job because of coronavirus symptoms, a spokesman tells Bridge Magazine. It quotes him as saying the workers "have symptoms consistent with Covid-19."

That comes shortly after Ford said 734 employees across its five Metro Detroit hospitals have tested positive for the potentially deadly virus. 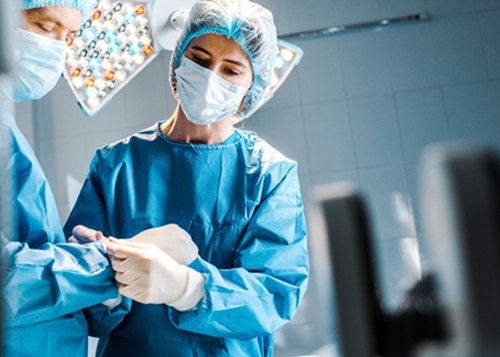 "Beaumont, in contrast, did not disclose how many of its 1,500 workers out with symptoms actually tested positive," according to Bridge. The Southfield-based network has 38,000 employees.

The sick workers include those who perform patient care, as well as those who work in administration and support positions. ...

The combined numbers at Beaumont and Henry Ford are the latest indication of how fiercely the coronavirus has attacked metro Detroit. And they underscore the growing anxiety of hospital workers, most notably nurses, who are in close contact with Covid-19 patients, often without adequate protective gear because of limited supplies. 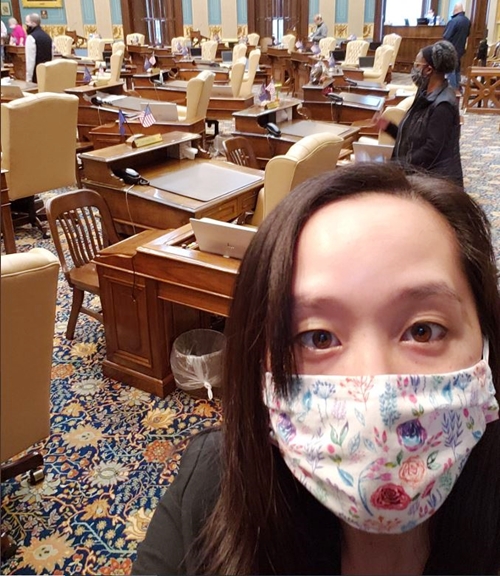 Michigan legislators voted Tuesday morning to extend Gov. Gretchen Whitmer's emergency declaration by 23 days until May 1, not the 70 days she requested.

One temporary medical facility in Metro Detroit isn't be enough to handle hospital overflows as the pandemic peaks, Gov. Gretchen Whitmer decides. She gives a go-ahead to set up a second federally financed field hospital in the Suburban Collection Showplace alongside I-96 in Novi.

It will have 1,100 beds for Covid-19 patients, more than the nearly ready TCF Center treatment area. (See new photo gallery.)

This project also is being set up by the Federal Emergency Management Agency, the Army Corps of Engineers, the Michigan National Guard and local contractors. The conversion will take up to two weeks.

The center's use as a treatrment center for an undetermined time could bump events that include a four-day Women's Show in June. The Michigan State Fair is booked there Sept. 3-7. Comic Con in mid-May was cancelled last month.

Detroit rapper Big Herk, a recording artist for more than two decades, is as shaken as any of us by the march of grim news. "Every day I go on my social media, it's just another death after another death," he says in the video below, urging Detroiters to stay home except for quick food runs.

"You can party at your house if it's that serious," the hip-hop performer adds. "But be in the public, just being around everybody, and you're spreading it more and more and you're taking it back to your home and they're taking back what you got to their home."

A win-win food program in Detroit

To help local food entrepreneurs, Detroit's government is buying 2,500 meals a week from independent restaurants for the next three weeks and delivering them to healthcare staffs, cops, medics, firefighters and bus drivers. "We have to keep our businesses afloat," Mayor Mike Duggan said Monday at his daily briefing.

Details about how to donate so the program can run longer, and how restaurants can sign up, are at Feed the Frontlines Detroit. 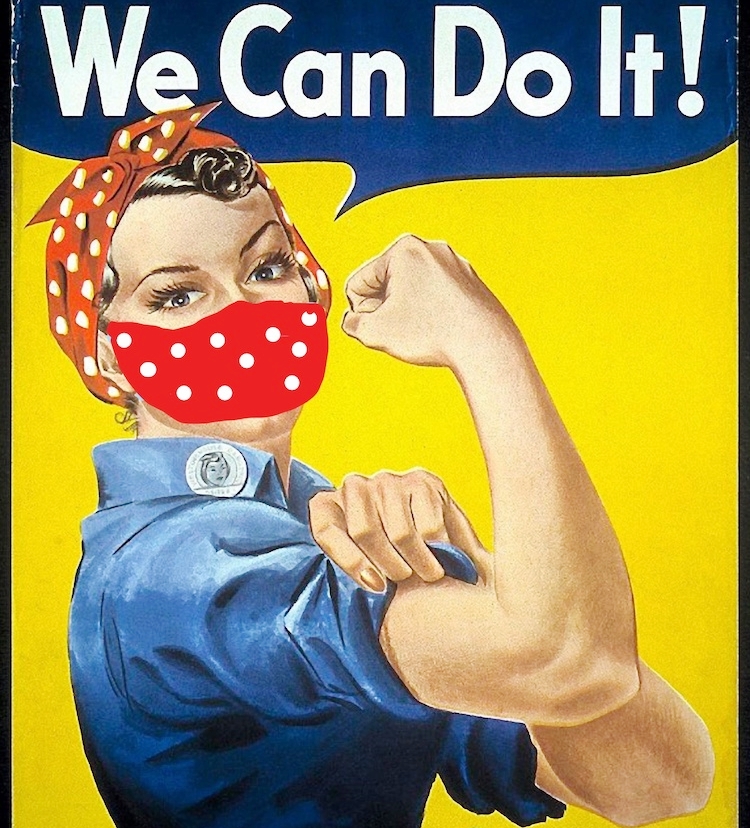 They brought 115 masks to the Delonis Center homeless shelter last week, and this week they plan to deliver about 100 to Peace Neighborhood, a community center for low-income families.

The seven Michigan Supreme Court justice adapt to life in the time of virus. They and attorneys presenting arguments will be at their homes or offices during two video hearings next week and two the following week.

"Justices will participate in oral argument via Zoom and the attorneys for the parties have all agreed to argue their cases using Zoom," an announcement says. "All four oral arguments will be livestreamed" and archived at the court's YouTube channel.

At least two cultural institutions around Detroit haven't trimmed staff -- yet -- even though they're shut.

"The Detroit Institute of Arts and the Detroit Symphony Orchestra are holding onto their staff for the moment," The Detroit News says. "But the Detroit Historical Society, Detroit Zoo and the Charles H. Wright Museum of African American History have all let people go and cut salaries for those who remain." And The Henry Ford in Dearborn furloughed 1,400 employees and cut pay by 10%-25% for the other 300.

Most area cultural organizations are bidding for part of the $350-million in the Paycheck Protection Program that's part of the CARES stimulus passed by Congress on March 17, designed to keep employees on payroll with federal loans. Only businesses with fewer than 500 employees are eligible, however, which rules out The Henry Ford.