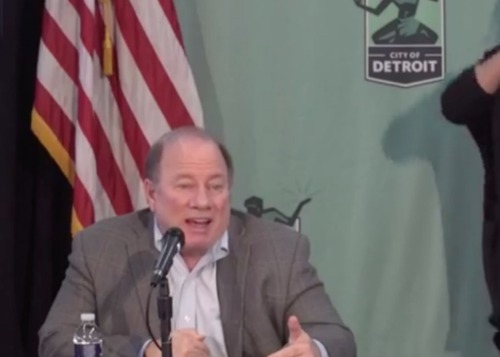 With revenues on the decline, including from casinos, and expenditures on the rise to battle the vicious pandemic, Mayor Mike Duggan anticipates more than a $100-million deficit for the fiscal year ending June 30, likely resulting in serious cuts in government.

"We’re are going to spend what we need to take care of our residents, and then as a community we're going to have to deal with the fact we've got a major budget deficit.  And I’ll worry about that in a week or two. Right now we’ve got to break the back of the virus."

The deficit forecast comes years after the city dug itself out of bankruptcy and was consistently balancing the budget. Job cuts will only add to what's expected to be a frighteningly high unemployment rate both locally and nationally.

Duggan displayed a chart showing that the number of cases in the beginning of the pandemic started doubling every two days, but now that has slowed.

"Now, what we're seeing is the rate of doubling is slowing to every five to six days," Duggan said. "This is what we are trying to accomplish and what we are doing is starting to work.

"This is the first glimmer of light since this pandemic started."

"The storm's not over, but for the first time we can see we can beat this and we can beat it in weeks, not months if we can keep doing what we're doing. However, if the weather warms up tomorrow and people go back outside and cluster in groups, this will very quickly rise back to doubling every three or four days. Except now we won't be doubling from to 10 to 20 Detroiters, we'll be doubling from 200 to 400 to 800."

During the press conference Duggan also announced that the city will be testing staff and patients at nursing homes around the city, and said officials are working to figure out when and how to restart more economic activity.

Update: Detroit Bus Riders to Get Masks; Drivers to Be Tested