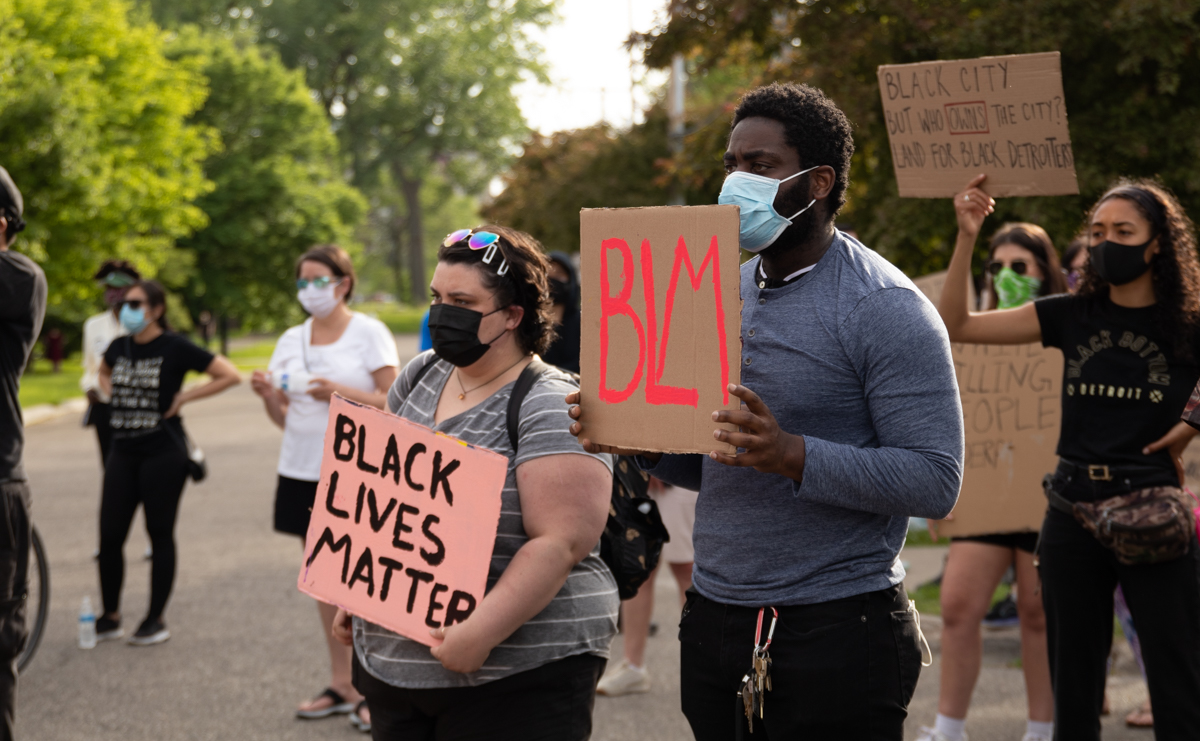 Protesters at Manoogian Mansion on a peaceful Wednesday night.

For a week, protesters have gathered in Detroit to speak out against police brutality and commemorate the death of George Floyd.

Some tell Miriam Marini of the Detroit Free Press of being unnecessarily roughed up by Detroit Police while being arrested. In six nights of protests, 381 people have been arrested.

The Freep spoke to some of those who were detained.

Yasmeen Ali, 18, tells the publicaiton she was walking near American Coney Island on Lafayette Street downtown at around 1 a.m. Sunday morning to get back to her car when officers came up behind her.

“I just remember being thrown on the floor and my face hitting the ground,” the Detroit native said. “I remember begging them, ‘Please, I have work on Monday, I don’t want to go to jail.’” When she asked officers why she was being held down, they told her “For destroying the city, r-----,” she recalls. She was charged with disorderly conducted and released hours later after her mother paid a $100 bond.

She tells the Freep at the detention center, those injured — including one man crying from what appeared to be a broken arm and another with a bloodied eye and busted teeth — were not given medical attention.

Damontae Daniels, 21, had a similar experience walking to his friend’s car Sunday night when he was apprehended.

“'Apprehended' is a slight word to use, he actually tackled me,” he said Wednesday. “They snatched me, he grabbed me, and he physically turns me around and he — using all of his body weight — slams me to the ground where my face hit the freaking cement.”

It was about an hour after curfew, and he and friends decided to leave a gathering at police headquarters. They cut through an alley and before he rounded the corner onto the street, he said he saw an officer crouched. He was then tackled by an officer and his hands were zip-tied, tight enough to tear skin. In the video, an officer can be seen turning to an onlooker and saying: “You want some of this? You want some of this? Get out of here.”