Donald Lobsinger is dead. For Detroiters of a certain age, the name should be familiar; Lobsinger was an untiring, unrelenting, uncompromising right-wing extremist for years in the city. 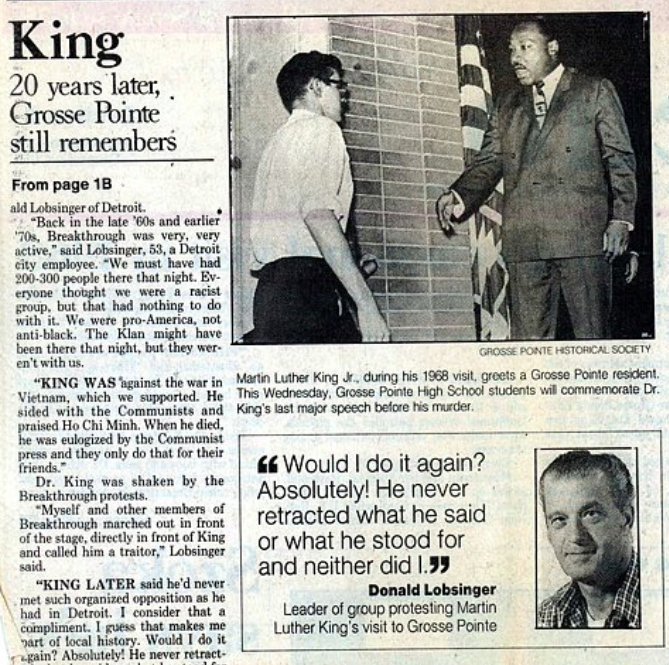 For those too young to remember, his death might be a reminder that no matter how big you get, there's always a chance your passing will be so low-profile that it'll take the news media more than a year and a half to notice.

Bill McGraw, Deadline's co-founder, contributes Lobsinger's obituary to the Free Press today, with the note that Lobsinger died Nov. 18, 2018, almost entirely without fanfare. That was by design, the funeral director said; the family wanted no public obits, and wrote their own for the funeral home's website.

Why? It sounds as though Lobsinger was a man caught between eras. He spent his life battling what he saw as the pernicious influence of Communism, on behalf of the Catholic church. But he cast a wide net, singling out '60s peace activists and Dr. Martin Luther King Jr. as threats to the nation, and his church, attacking them under the banner of the group he led, Breakthrough.

Lobsinger’s pugnacious flamboyance made headlines. When the Bolshoi Ballet stopped in Detroit as part of a cultural exchange, he tossed anti-communist flyers from the balcony. When another touring Soviet troupe made an appearance at Masonic Temple, Lobsinger and Breakthrough members tried to enter dressed as a priest, soldiers carrying a casket and a mourner. Police once arrested him for fighting them after they stopped Breakthrough from sneaking a float into the St. Patrick’s Day parade.

To protest the modernization of Catholic rituals and music after the Second Vatican Council in the 1960s, Lobsinger and acolytes showed up at Sunday masses at east-side churches dressed as clowns, playing guitars. Lobsinger hated the change to English in Catholic liturgy and was known to interrupt masses by praying in Latin and reciting the rosary aloud.

He led a group of more than 200 to protest King's speech in Grosse Pointe, given three weeks before his assassination. In a 1988 look back at the incident, he told the Detroit News he'd "absolutely" do it again, because King "never retracted what he stood for, and neither did I."

When Lobsinger confronted opponents, he acted as if in a trance, with neck muscles bulging, eyes flaring, a finger slashing through the air and his language ferocious. He was all business, never taking vacations, never marrying, devoting nearly all of his free time to the cause.

His funeral was attended only by a few close friends and family. One wrote in tribute, "Don Lobsinger and his organization Breakthrough led the attack in the Detroit area against the enemies of the Holy Catholic Church, our Country and Western Culture.” One gets the feeling he'd fit right in with the various far-right groups of today, many of whom who cloak their rhetoric in concern for "Western culture."

It's a fascinating read.