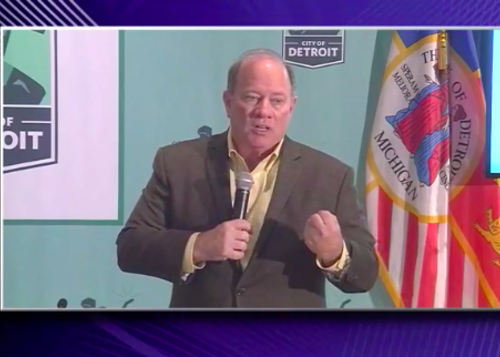 Duggan in a Monday media briefing.

Detroit Mayor Mike Duggan defended Gov. Gretchen Whitmer’s latest round of Covid-related business shutdowns Monday, saying a surge in cases in the suburbs left her with no choice but to take action in the region as a whole.

He added that a White House medical adviser who encouraged Michiganders to "rise up" against the restrictions was "behaving like a moron."

At 6.8 percent, Detroit’s infection rate — or the percent of positive Covid-19 tests — is about half that of Oakland, Macomb and suburban Wayne County, which each range from 12.6 to 17 percent. But Duggan said that while the new rules may seem unfair to affected Detroit business owners, the city is not immune from regional spread.

“There is not a wall around Detroit,” said Duggan. “Had (the governor) treated Detroit as its own region ... and Detroit was the only place in southeastern Michigan where restaurants, casinos and entertainment were open, all of the folks in these surrounding areas with these ridiculous infection rates would have had one place to go.”

On Sunday night, in response to a second surge of the pandemic, Whitmer shut down in-person high school and college, indoor bar service and dining, casinos, exercise classes and other activities.

Daily covid case totals in the state have reached new highs in recent days, with a record 8,516 cases reported Friday. There are more than 250,000 people infected and at least 26,000 hospitalized statewide.

Whitmer's shutdown order is to last three weeks, but Duggan said he expects a three-month fight.

Casino closures are expected to disproportionately hurt the city, which relies heavily on its three gaming centers as a source of tax revenue. In April, following their initial shutdown, the city projected an approximately $350 million budget hole through the end of June 2021.

On Monday, the mayor said it was too soon to understand the economic fallout from the latest round of closures, adding that it is “not my first concern right now.”

There are currently 145 people hospitalized with Covid-19 symptoms in Detroit, lower than elsewhere in the region. Duggan left open the door for the possibility of reopening a field hospital at the TCF Center should hospitals in the region begin to overflow.

Duggan also encouraged more testing to head off outbreaks and warned of penalties for businesses that fail to follow Covid-19 guidelines.

At least a half-dozen businesses, including bars, nightclubs and a gym where the city's chief health officer said no one was wearing masks, were required to shut down between summer and fall, Duggan said. Residents can report violators via a new reporting tool on the city’s website.