LeDuff: A Body Collector in the Time of Covid – Thirty Bucks the Hard Way 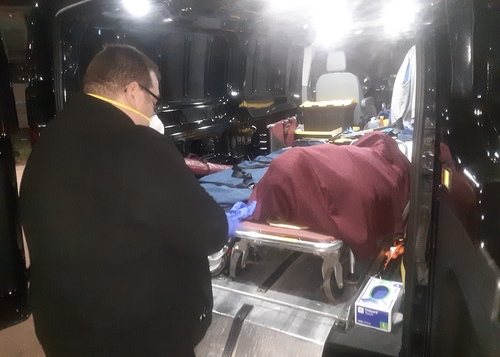 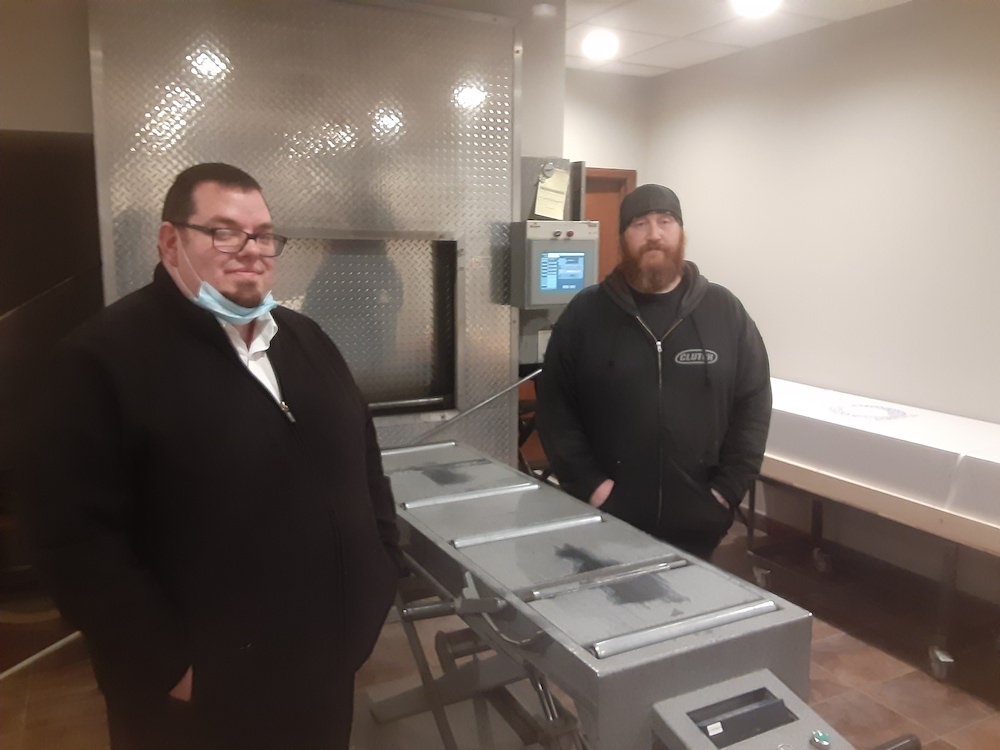 Matt Dziadzio (left) and crematory worker Jeremy Mikeska in front of a crematorium.

A dead man is much heavier than he appears.

And in those cases where a body has been infected with Covid-19, an extra psychological burden is carried by the living man who collects the remains of the dead.

“I'm at that point where the man upstairs wants to take me, he's taking me and that's the way I look at life,” says Matt Dziadzio, a body retrievalist who estimates he has collected more than 600 Covid-infected cadavers since the coronavirus hit Michigan back in March.

“I can't let it get to me or else I'd be dead myself just from the worrying and the anxiety of it.”

Dziadzio is on call from 2 p.m. to 7 a.m., cruising the streets of Metro Detroit in his black Ford van, waiting for a call from the police or a hospital or a nursing home to come collect the dead.

His official title is funeral director's assistant. Unofficially, you may call him a bag man, a body fetcher, night crawler, livery driver for the unliving. Call it $30 a body. Call it 30 bucks the hard way. The job description fits neatly into the “Someone's Got to Do It” category.

Throughout this global pandemic – from Calcutta to São Paulo to Detroit – many wonder: Who collects the dead? They must certainly be the most essential worker of all. Or the craziest.

“People think I'm mad,” says Dziadzio, a corpulent, goateed 36-year-old, now on his way to a Covid-related death in the western suburbs. “When I come around and they know what I do, they avoid me. Occupational hazard I guess. Someone has to give the dead some dignity. I like my job to tell you the truth.”

First stop of the night

We arrive at a drab condominium in Novi. A cop is inside. And another retrievalist. In all, 10 people will come in close proximity to the corpse: the cop, the paramedics, the bag men, the funeral directors, the crematory workers. All of whom go home at the end of the day.

It is a gruesome scene. An old man dead near the door, naked except for his socks. His mouth agape and eyes glued open, as if he'd died of fright. The bag men work in silence. When they lift the remains to the gurney, a gurgling noise wheezes from the corpse.

Dziadzio wheels him to the van. There is no wall separating the cab from the cargo area, no Plexiglas sheet. There is room for two in the front. And two in the back.

And of course, the retrievalist won't. It's the nature of the job.

After dropping the body at the funeral home and slathering himself in sanitizer, Dziadzio drives to the crematorium, a mammoth processing plant in the middle of Livonia because he wants me to see.

We are in the midst of the second Covid wave. But like the bag man, the crematory workers say – in terms of death -- there is no comparison to the spring wave when six retorts, the furnaces, were working 24 hours a day.

“The first round we had refrigeration outside,” said crematory worker Jeremy Mikeska, 42. “We had trucks. It was crazy. It's not that bad this time.”

He shows me a video with coffins from April. Wall to wall, stacked four high. The overflow was lined up outside near the cargo bay doors.

“I literally got PTSD from this shit to be honest,” Mikeska says. “I mean I put up with it to an extent. But once you see so much of it it's like wow.”

In a nursing home, no escaping the air

The day has gone dark now. It is cold. Maybe it's the company, but the silhouette of the nude trees through the windshield give one the feeling of old bones. Dziadzio's phone pings. A nursing home run. He doesn't need GPS to find it. He gooses the van. 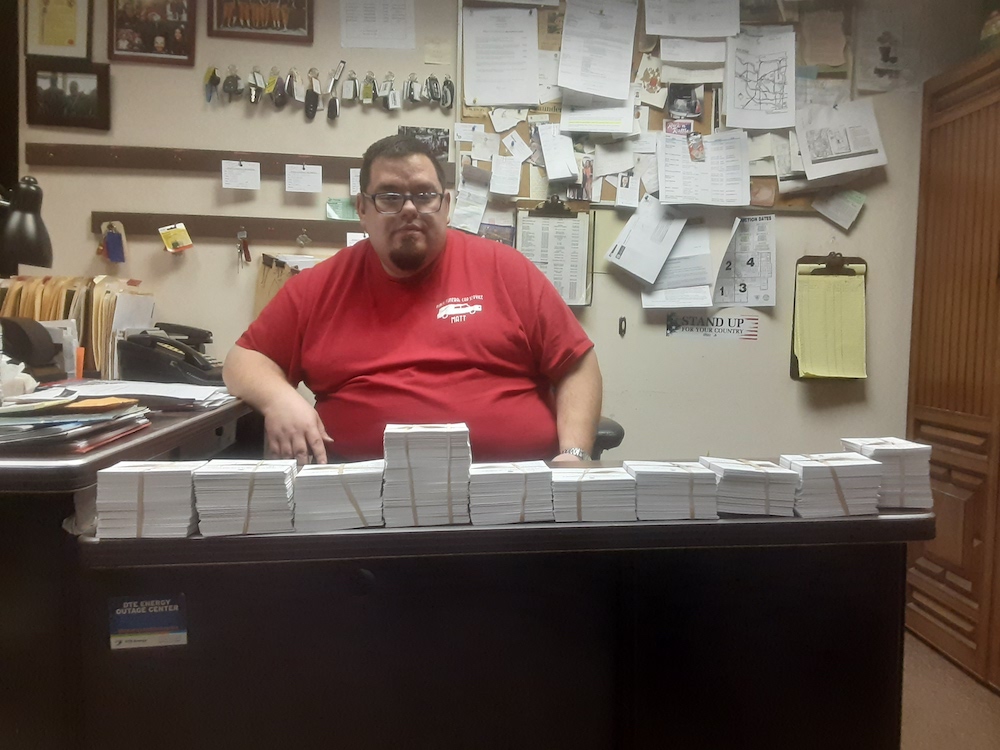 A one-time mechanic, Dziadzio was doing repairs on a funeral hearse when the owner asked him if he'd like a job. He took it. Just like that. It was 15 years ago.

Dziadzio fell in love once, got engaged, fell out of love and then got unengaged. The job, as one might imagine, is not conducive to an active love life, he says. “Once you tell them what you do, it's pretty much over.”

We pull into the parking lot of the nursing home. It's higher-end. Neat. Well-lit. Even so, the corpse collector mocks the state's response to these long-term care facilities, where Covid runs rampant and at least half the deaths occur.

“They're using the same circulatory air,” he says. “Each room has its own heater and shit, but the whole HVAC system is coming from one place.”

“I thought state required them to fix that.”

“They don't do none of that shit,” he said. “Some places are still using plastic sheets. Some places they lock them away because nobody's checking. You can see it on the bodies with the ulcers and bed soars."

No separation from risks

Like Jeremy, the crematory worker said: Wow. Ask me anything about Covid data, Covid graphs, governmental double talk and I can quote it. Many of us can.

But then there are things as they really are. And just wow. The state of Michigan claims it put protocols in place to secure nursing homes from the spread of the virus. This place is nicer than most. But even here, the entrance is the same for all workers whether they work in the Covid unit or not. One wing of the home serves as the infected ward. The other wing for the uninfected. Nothing divides the two.

Our temperature is taken at the front desk, where a sign reminds workers to socially distance and wash their clothes. We are let into the Covid unit by way of the fire door.

The old man was loved, judging by the photographs of his family that surrounded him. Dziadzio ties the bedsheet around old man's body and then we lift him onto the gurney. I take the feet. He takes the head. We wrap him in plastic, then a blanket and finally strap him in. Dziadzio tags the big toe on his right foot.

I notice the left toe is curled into the shape of a fish hook. He gathers the man's personal effects – a pair of eyeglasses and a set of dentures -- and we leave through fire door. I can't help but admire the nursing staff.

“Merry Christmas to you.”

We drive the body to a funeral home in a small town a few miles away. The back roads are empty and covered in a thin blanket of fog.

“He was heavier than he looked,” I say absentmindedly.

“They always are. Always.”

The funeral home is an old clapboard mom-and-pop operation near the railroad tracks and our corpse collector lets himself in the back door with a key left under a mat.

He lifts the body onto the embalming table, adjusting it into a dignified repose. Head propped up. Arms across the chest. Dziadzio covers him with a sheet of plastic and a blanket, and then shows himself out. He locks the door and returns the key under the mat.

'You're gonna smoke that?!"

Back in the van now, Dziadzio fires up a cigar.

“To hide the stink and celebrate life,” he explains. “Hopefully they got it better in the afterlife than they did in this life.”

He fumbles the cigar and it drops to the floorboards. The body retrievalist stoops over to retrieve it and balances it on the lip of the ashtray.

“You're gonna smoke that?” I say, incredulous. I'm thinking of where his feet have been today.

“You're gonna smoke that.”

“You just put it in the ashtray!”

“That's cause I don't want to forget it and it gets wet and ends up everywhere” he insists.

“Yeah, but now you're going to put your other cigar in there. You were just walking all over a nursing home with a Covid guy in there,” I say, trying to explain the theory of community spread. “It touched the ground and now you put it in the ashtray!”

That's the life of the body man. Thirty bucks the hard way. And miles to ride tonight.

The writer hosts a weekly podcast, The No BS News Hour.