The all-stock deal creates one of the largest regional banks, with dual headquarters in Detroit and Columbus, Ohio.

The banks will operate under the Huntington name. That means the TCF Center, known as Cobo Center until August 2019, will be renamed Huntington Center. 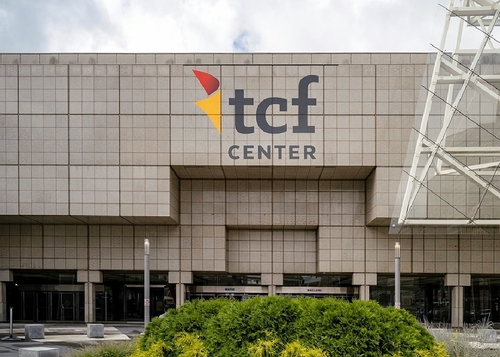 This name went up just 16 months ago.
(Photo from bank)

The deal is expected to close in the second quarter of 2021, pending regulatory approvals.

"We will be stronger together and that this combination will benefit you," TCF says on its website. "We look forward to sharing even more with you about this exciting partnership as time goes on."

It's the second merger for TCF in a relatively short time. In January 2019, it announced the merger with Chemical Bank.

Breana Noble of The News reports:

The combined entity will have approximately $168 billion in assets, $117 billion in loans and $134 billion in deposits.