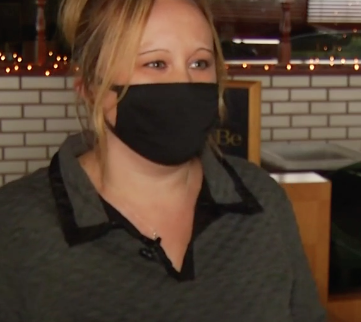 Becky Beer, a waitress at J.W. Filmore restaurant in Petoskey in northern Michigan, got lucky Tuesday: A couple left her a $2,021 tip after she brought the $49.69 carryout order to their car.

The couple who left the credit card tip reportedly are business owners who started a "Just Be Nice Tip Challenge" last December, in hopes of inspiring others to show generosity. Their first surprise tip was $2,020 to Danielle Franzoni at Thunder Bay River Restaurant in Alpena, Mich., according to WPBN of Traverse City. They moved to Petoskey this year, the ABC affiliate says.

"In a year full of turmoil, they showed up and showed how great some people can still be," restaurant owner Erika Closs posts Wednesday on Facebook. "Please, whatever you can do -- whether it may be monetary or just a nice gesture -- let's show the world that in 2021 we can get past the hate and be nice to one another."

Beer, who is 36 and has worked at the restaurant 10 years, tells the Petoskey News-Review she'll pay off bills with part of her windfall and put some into a family foundation honoring a late uncle.

"It's just amazing. There's so many people in this area, in particular this region, that it could have happened to," Beer adds in an interview with the local paper. "I feel almost guilty. ... I'm just extremely thankful."