Covid vaccine eligibility expands significantly across Michigan next week when anyone 65 or above can roll up her or his sleeve for a free shot.

Saying that, as the governor did Wednesday, is the easy part. Making it happen is tough and could take two to three months in some areas.

Vaccinations are "going at a slower pace than we would like," Tricia L. Foster, the state's chief operating officer, said Friday afternoon at a briefing with the governor. Only 28% of Michigan vaccine doses shipped since Dec. 14 have been administered. Nationally, data from the Centers for Disease Control indicates that only about a third of the doses distributed so far have been used.

Frustration surfaces from a suburban Detroit leader. "We urge the State of Michigan to increase Oakland County’s vaccine allotment while expanding the number of providers administering the vaccine," Oakland County Executive David Coulter says in a statement.

"We look forward to expanding to the next phase, which will include essential workers and residents 65 and older, but ask for their patience because the number of appointments available is limited to the number of doses we have received from the state." 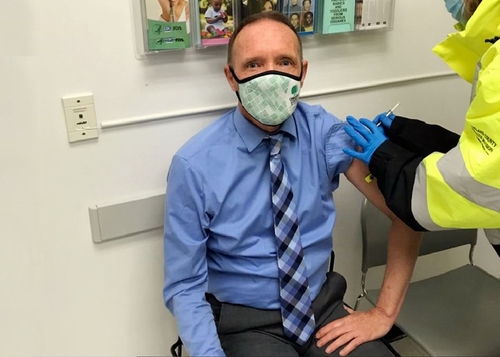 Roughly 200,000 Oakland senior citizens on Monday will be eligible for vaccines, but the county has received only 69,050 doses as of Thursday and had about 42,800 left Friday. A tweet by Oakland Press reporter Mark Cavitt quotes the Democratic executive as saying: "If we don't have the vaccines on hand or high confidence that they're on the way, we're not making the appointment."

In Detroit, by contrast, drive-through appointments for residents over 75 will start being booked Monday and vaccinations begin Wednesday at TCF Center's garage. (Details here.)

More than 205,400 shots have been given statewide as of Friday and 520,400 more doses were available or en route to Michigan.

The CDC ranks Michigan’s vaccine administration in the bottom half of all states when adjusted for population size. That’s despite being allocated more vaccines than all but six other states.

Governors are under enormous pressure from their constituents — especially older people, who vote in great numbers and face the highest risk of dying from the virus — to get the doses they receive into arms swiftly.

Allocation amounts vary from week to week, which complicates planning, and governors in Michigan and elsewhere say they're insufficient. That starts changing in two weeks.

"The president-elect ... supports releasing available doses immediately, and believes the government should stop holding back vaccine supply so we can get more shots in Americans' arms now," a spokesman for Joe Biden's transition team says Friday. "He will share additional details next week on how his administration will begin releasing available doses when he assumes office" Jan. 20.

In Lansing, the governor's deputy chief of staff reacts by tweeting: "This is big news. Gov. Whitmer and eight other governors called on the Trump administration to take action on this yesterday." Federal officials are reserving half of U.S. vaccine production to ensure required second doses are available.

In Metro Detroit, Beaumont Health posts that it "will begin sending invitations to schedule vaccine appointments to people 65 and older starting next week." Email or text messages will go to patients in the eight-hospital network's database who are 65 and older.

Beaumont now provides drive-up shots for about 3,200 people day at its Southfield Service center, according to the Free Press, but has only another week's worth of Pfizer and Moderna vaccines. If it gets enough additional vials, two more drive-up clinics are planned — one in Oakland and one in Wayne County.

"And as we move on, we're going to have to figure out how do we get to those people that are just not technologically advanced enough to make [digital appointments]," Dr. Jeffrey Fischgrund tells the paper. He's chief of clinical services and medical director of Beaumont's Covid vaccine steering committee.

Similarly, Henry Ford Health System announces that it "is finalizing plans to expand our vaccination program to include patients age 65 and older, as well as others who meet the state’s expanded guidelines.

We expect to begin providing vaccinations as early as Monday at one Detroit site, with plans to open additional sites by the end of next week.

We will soon be reaching out proactively to our eligible patients to provide resources to help them make an informed decision, as well as encourage them to sign up for a MyChart account if they don't already have one, for convenient online scheduling when appointments become available.

Additionally, we are also working with multiple community partners to provide vaccinations for the expanded group of essential workers, independent physicians and healthcare providers, as well as clinical students who are participating in educational programs at Henry Ford Health System. More details will be released as they are finalized.

St. Joseph Mercy Health System, serving six Southeast Michigan counties, also will vaccinate its senior citizen patients and some others in the Priority 1b group (see graphic below).

And in Ann Arbor, Michigan Medicine emails patients Friday to say it'll also invite digital appointments for existing elderly patients, starting Monday, and hopes "to reach all established patients age 65 and older in the next 2-3 months."