High-visibility actions have consequences. Three congressional Republicans from Michigan appear likely to feel meaningful impact from actions they took on the House floor at the end of a long, terrifying day last week.

Those dissents from the bipartisan majority that confirmed the Nov. 3 victory of Joe Biden and Kamala Harris put the Michigan trio at risk of being marginalized in the House and receiving fewer business campaign donations.

The Michigan Democratic Party chair says Tuesday that they should resign for "voting to undermine the will of the voters in those two states and across this country." Lavora Barnes adds in a statement:

Representatives Walberg, McClain, and Bergman’s actions have been nothing short of an attack on our democracy, a betrayal of those who they represent, and an attempt to overturn a legitimate election in favor of a wannabe authoritarian. Their conduct is a disgrace to the three Congressional districts they represent, and to all the people of Michigan. They each should resign — immediately. ...

They have made baseless claims, filed frivolous lawsuits, and attempted to overturn certified state results through congressional action. I hope the good people of Michigan’s 1st, 7th, and 10th Congressional districts see this blatant assault on our democracy, and their freedom, for what it is and join us in calling for the immediate resignation of Representatives Bergman, Walberg, and McClain. 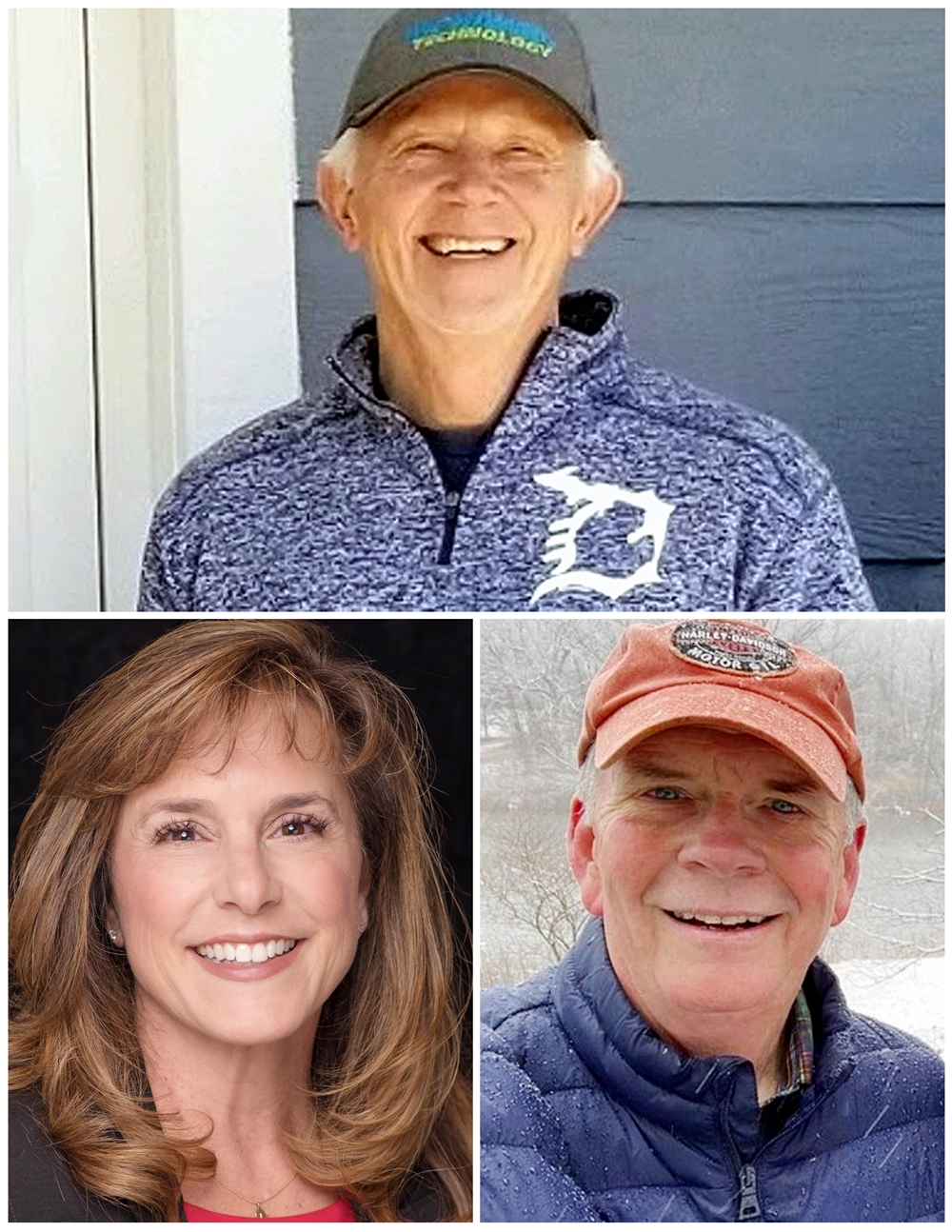 They're also called out in media commentaries, starting with a Deadline Detroit column last Thursday and a Free Press editorial Sunday. "Each bears responsibility for perpetuating the lies and fueling the outrage that led inexorably to the Capitol rampage," says the paper's editorial board.

Had they prevailed in their efforts to overturn the election results, those who attempted to derail certification would have effectively disenfranchised more than 81 million Americans, including the 2.8 million Michiganders who cast their ballots for Biden.

The Columbia Journalism Review on Monday refers to the seven Senate and 138 House dissenters as "Trump's congressional enablers."

A more tangible rebuke could limit their House roles and visibility. "Senior Democrats are talking about cutting off any Republican who voted against certifying the election," journalist Jake Sherman tweets Monday from Washington. He's a co-founder of Punchbowl, a two-week-old politics news membership site created by three Politico defectors.

Their bills could go nowhere

Sherman explains how the Democratic majority could ostracize election obstructionists in Congress: "That means no bills with them, no letters with them, blocking their initiatives in committee and pressing downtown allies [lobbyist donors] to cut them off."

Rep. Dan Kildee, D-Flint, tweets Sunday about "Republican colleagues [who] ... voted to overturn the results of a democratic election" and says bluntly: "You have no moral authority."

"We can't have a democracy if members of Congress are actively helping the president overturn the election results,” she says Tuesday night in a Facebook Live video.

The backlash also includes potential withholding of contributions to 2022 re-election races, a setback that could embolden Republican primary challengers to emerge.

Rocket Holdings, part of Dan Gilbert's network in Detroit, is "suspending all political giving as we contemplate the role corporations play in the political process." That parent firm of Quicken Loans and Rocket Mortgage last year gave $2,500 each to Walberg and Bergman and $5,000 to McClain, according to the Federal Election Commission.

The new reality is that business backers risk damage to their reputations if they help election result deniers. Influential political ad creators at the Lincoln Project, founded by anti-Trump Republicans, vow to target companies that support lawmakers who opposed last week's customary process. 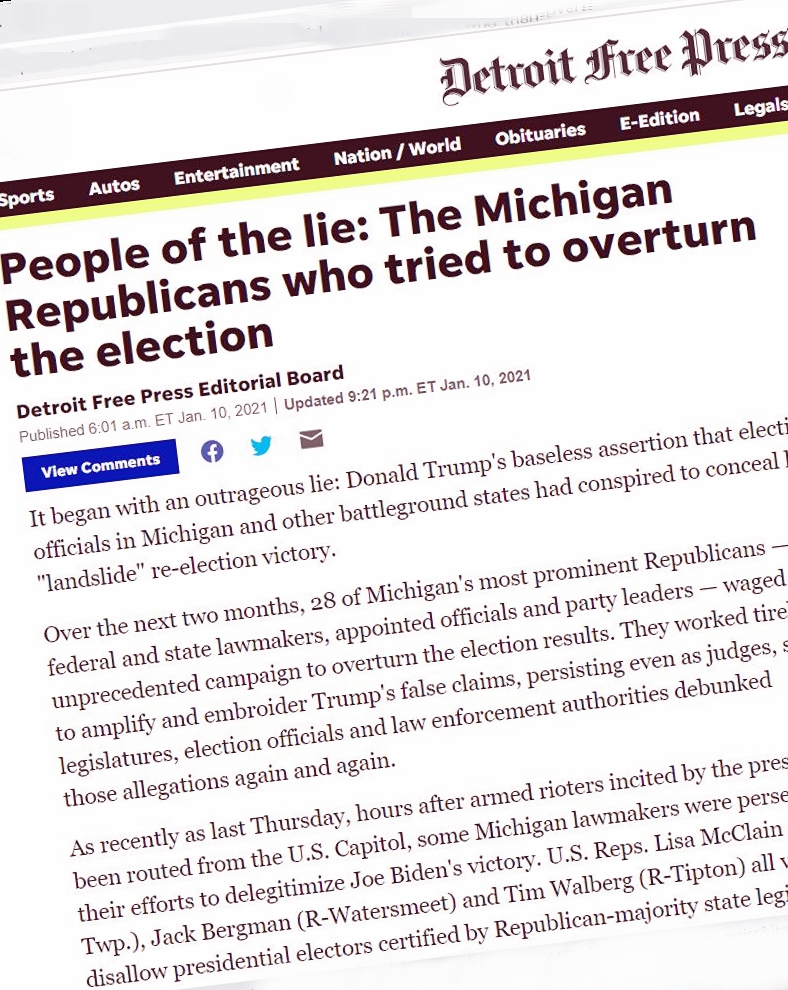 For their part, each Michigan dissenter condemns violence by a mob that shared their "Stop the Steal" stance. Damage control excerpts:

♦ McClain: "What started out as Members of Congress following a sacred and Constitutional tradition, quickly was overcome by violent protestors. I wholeheartedly condemn the violence and vandalism at the Capitol and all who participated in such evil behavior. ... We are all Americans, first and foremost."

♦ Walberg: "For those with legitimate concerns about election integrity, yesterday should have been a time for robust and respectful debate on the House floor. My focus for that forum was a method to provide greater transparency and raise concerns on behalf of my constituents who lack faith in the electoral process. ...
"This vote was never about overturning election results. Safeguarding the ballot box is bigger than one candidate and one election. It was about ensuring free, fair and legal elections are an unquestionable certainty in the future. Moving forward, we must settle these unanswered constitutional questions in order to prevent future irregularities and restore Americans' confidence in the process."

♦ Bergman: "[I stood] for my belief that irregularities, discrepancies and usurpation of state election laws demanded an investigation into the 2020 election. ... Congress and state legislatures have an obligation to provide restored confidence to the tens of millions of Americans who have lost faith in our election process. ... I didn’t fight for our country for forty years to see us devolve into settling political disputes by violence and intimidation."

Those seem like late, futile efforts to shut a door that swung open far more ominously than they expected. The trio has "no moral authority," as fellow delegation member Dan Kildee says.