10 Miles from Detroit's Train Station, Another Radical Ford Project Is in the Works -- And Few Notice 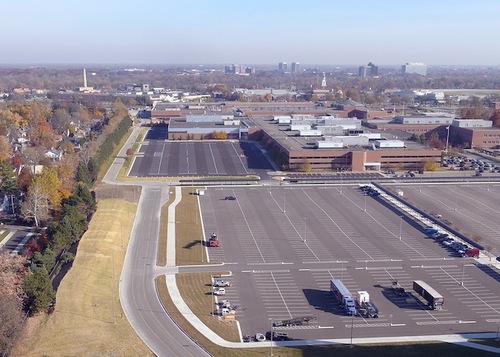 Ford Motor Co. has received voluminous publicity for its development of a 30-acre global mobility center in Detroit’s Corktown, anchored by the long-abandoned Michigan Central Station.

Just 10 miles away in Dearborn, the company has started a radical overhaul of its 700-acre research and engineering campus along Oakwood Boulevard. And that project gets little attention.

Yet work on the campus, located across from the Henry Ford Museum, is equally game-changing, combining an expansive corporate presence with nature and public access. Costs have been estimated at several hundred million dollars.

The Ford campus is where 11,000 employees design future Ford products and test their inner workings. It’s the place where Lee Iacocca saw a model of the Mustang and instantly knew he had a winner because the brown clay prototype “looked like it was moving,” he later recalled.

As a story by Bill McGraw on Planet Detroit explains, Ford’s Norway-based architectural firm, Snøhetta, has plotted a campus where automobiles are banished to the perimeter, wooded groves, greenspace and wetland rule and the heavy security relaxed to allow neighbors and others to use what will be partly lush parkland, plus restaurants and other amenities.

“By blurring the boundaries between company and neighborhood, 118-year-Ford Motor has put itself on the cutting edge of modern architecture, into the realm of such contemporary trendsetters as Google, which has employed a similar approach at its new Charleston East campus in Mountain View, California,” writes McGraw, co-founder of Deadline Detroit.

He continues: “The relaxing of security on the Ford campus has come without fanfare. Workers recently completed the construction of unguarded vehicle entrances and sidewalks that are twice the normal width, to accommodate pedestrians and bicycles, though most perimeter fencing remains in place. In a reflection of past thinking, one length of the barrier is composed of black steel bars with arrowhead-like tips. A Ford Land spokesperson could not say when the fences will be removed.”

The current campus is dowdy and marred by acres of parking lots. It is not to be confused with the General Motors Tech Center in Warren, “designed in mid-century modern splendor by the famous Eero Saarinen.” That site also has long been closed to the public.

The story also touches upon the subject of Bill Ford’s so-called  environmentalism, and the Planet Detroit site features a sidebar on the FCA complex on the east side of Detroit, where officials erected a perimeter wall that has drawn criticism from some neighbors and many local artists, who have objected to a plan by the city of Detroit to prettify part of the wall with murals.