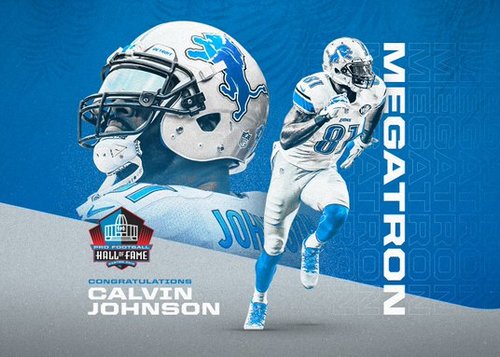 There was never really much doubt retired Detroit Lions wide receiver Calvin "Megatron" Johnson was headed to the Football Hall of Fame in Canton, Ohio.

Mike O'Hara, a veteran football writer who is now a columnist for the Lions' website, writes:

Megatron is taking his rightful place with the legends of pro football.

Calvin Johnson, dubbed "Megatron" as a rookie with the Detroit Lions because of his otherworldly physique and athleticism, has been voted into the Pro Football Hall of Fame...There was never any question about whether Johnson had the ability or impact on the game to warrant induction into the Hall of Fame in Canton, Ohio.

The only issue that put his candidacy in doubt was the length of his career. Johnson played only nine seasons, which did not allow him to compile the gaudy stats required for most receivers to make it to Canton. The fact that Johnson was voted in on the first ballot was a clear signal that the voters chose quality over quantity.

Lions great Barry Sanders told O'Hara earlier this week: "I am a little biased, but I don't know how you could keep him out. Look at the numbers he put up and how dominant he was as a player."