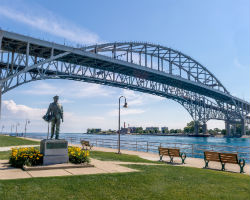 Johnny Grays, 42, who is married with three children, has worked at the CBP for almost 13 years. He says not only has he witnessed racial profiling, but he has also been ordered to take part in it. And when he and his co-plaintiffs have complained about workplace discrimination, the suit states, they've either been ignored, harassed or retaliated against. Grays has been placed on desk duty since filing his discrimination complaint almost a year ago.

The Michigan lawsuit highlights what some immigration and civil rights advocates describe as a pervasive and unchecked problem of racial profiling at the CBP, an agency they say has been steeped in institutional racism for decades.

Similar racial profiling lawsuits have been filed over the years in Montana, Virginia, Texas, Washington, Ohio and Maine, though the CBP has routinely denied culpability and avoided repercussions.