A four-month-old boy is recovering after being found abandoned in a wooded area near Waldon and Joslyn Roads in Orion Township. He is apparently the son of a 37-year-old woman who was in the area "pounding on locked doors" and ringing doorbells, prompting neighbors to call 911. 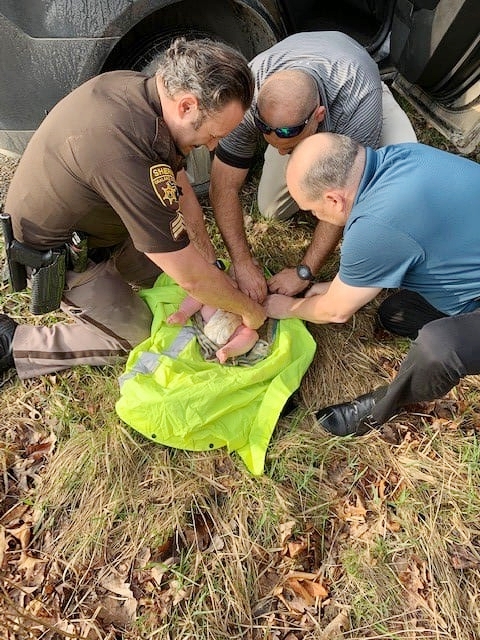 A deputy snapped this shot of the drama. (Photo: Oakland County Sheriff)

Deputies originally responded to the area after two 911 calls from neighbors reporting a distraught woman hiding in bushes and ringing their doorbells, according to police. When deputies arrived, the woman was no longer in the area. Residents said the woman believed that someone was chasing after her with guns.

Other reports from Waldon Middle School stated that a woman was pounding on the locked doors of the school. This led the police to find and identify the 37-year-old Orion Township resident, police said. They began interviewing her, discovered that she had an infant son, and noticed "burrs on her pants, suggesting she may have been in a field or wooded area."

"Deputies estimated the best location where the mother may have been and began searching in a one-mile grid between the woman’s home, the school, and the neighbors who had reported the suspicious activity," according to the report.

The child was found within 30 minutes, suffering from hypothermia. He was kept overnight at St. Joseph Mercy in Pontiac and is expected to be released today. The incident may be related to prescription drug abuse, investigators believe.