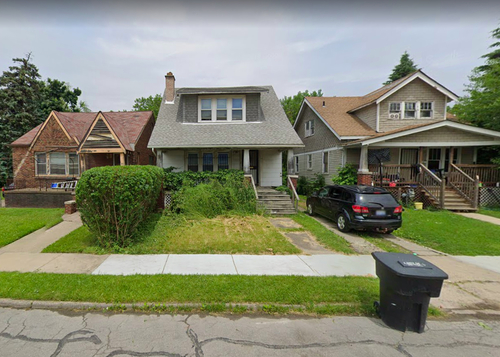 The skeleton was reportedly found in the center house, on the 900 block of E. Hollywood. (Photo: Google Maps)

A man who clears abandoned houses for the Detroit Land Bank Authority recently made a discovery too grim to show on TV news when he says he found a full human skeleton leaning on a couch "like he may have been sleeping or something," Fox 2 reports.

The skeleton was in a single-family house on a fairly occupied stretch of East Hollywood Street, near I-75 and south of 7 Mile.

It's unclear to whom the remains belong; Detroit police were called to the scene and are presumably investigating. The house has been unoccupied for two years, neighbors tell Fox 2. Before that, a man who lost the house to tax foreclosure lived there as a "squatter."

Quincy Norman, who works for a company contracted by the Land Bank, believes the bones may be a new addition. He tells the station he was inside last week and walked by the same couch and didn't notice anything.

Norman didn't pause to try the crack the case. Instead, Fox 2 reports, "he rushed his crew out of the house, locked the front door and called 911."