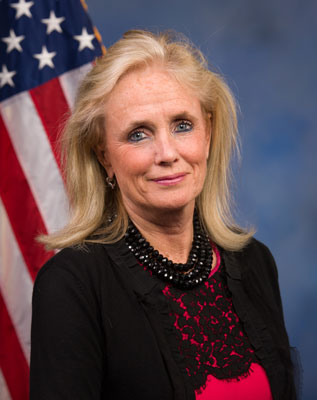 Rep. Debbie Dingell: "I may actually have to give up junk food and Diet Coke." (Photo: U.S. House)

Michigan Congresswoman Debbie Dingell, 67, had an emergency operation Friday at George Washington University Hospital in D.C. for a perforated ulcer, her office said.

"The procedure was successful and she is recovering well," spokesperson Mackenzie Smith says in a statement. "For the next few days she will be recovering at the hospital."

► Update: The representative "seemed in good spirits" Saturday, reporter Todd Spangler posts at the Detroit Free Press after getting this message reply from her: "I may actually have to give up junk food and Diet Coke."

He also writes: "She said she started to have a stomach ache on Thursday that got worse on Friday. ... Dingell is expected to recover for five to seven days."

Her aide's earlier statement says: "After jaw surgery earlier this year with an unwillingness to take opioids, Rep. Dingell has used NSAIDs (nonsteroidal anti-inflammatory drugs) to manage pain and discomfort. Always a hard worker and clear communicator, she insisted on using her experience as a cautionary tale that NSAIDs can be harmful."

The medical crisis came three days after Dingell was among Democrats greeting President Biden during a Ford Motor Co. visit in her district.

The congresswoman, who lives in Dearborn, has been in the House since 2015. She's the widow of John Dingell, her predecessor in the seat, who was the longest-serving U.S. representative in U.S. history.

At her personal Facebook page, where Dingell posts diary-like reflections nearly each day, she gave a glimpse last week into the type of stress her public profile brings.

"This week cannot end soon enough. People's tempers are short, I have been yelled at, threatened, pressured, denounced, insulted, vilified, hated enough this week and honestly, wonder when that became part of the job description, she said May 13. "We all need to think about language, civility, respect. Disagree, express another opinion, give a different perspective, have a decent dialogue. ... The way we treat each other now is becoming a danger to civil society."