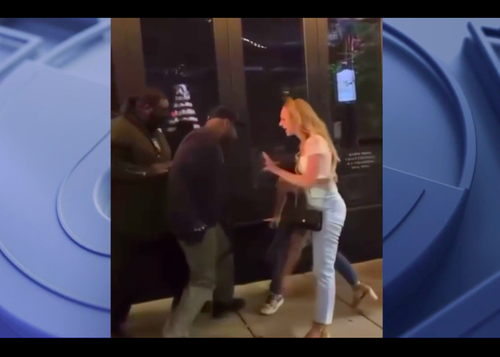 If you didn't know Greektown bouncers could be hella aggro toward partygoers, Fox 2 has a video for you.

Taken Saturday night, it shows a heavyset bouncer put both hands around a man's neck and shove him to the ground, then hit a woman he's with in the face as she intervenes, prompting her to knock her head on a light pole and fall.

The kicker: Two Detroit police officers were apparently in the vicinity. They're seen at the end of the clip watching the young woman walk away. It's unclear if they took any action, but Fox 2 reports the department is investigating.

The incident occurred outside the Level 2 Bar & Rooftop on Monroe Street after the couple was reportedly kicked out. Security personnel are often forced to contend with rowdy crowds in the entertainment district, but the man appeared to only be talking to the bouncer before he was attacked. The woman put her hands on the bouncer before she was hit.