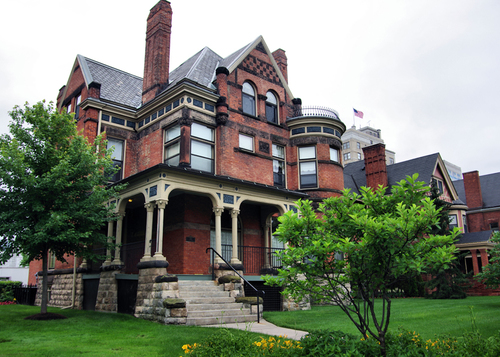 The Inn on Ferry Street had 40 rooms across six houses. (Photo from business)

In Midtown, a cluster of historic homes repurposed as a boutique hotel, will soon likely serve another purpose, with its co-owner saying the pandemic wiped out business and prevented reopening.

The Inn on Ferry Street, owned by the Detroit Institute of Arts and Midtown Detroit Inc., offered stays from $159-$229 a night and was barely breaking before the pandemic due to costly upkeep of the Victorian-era homes, the non-profit development group's Sue Mosey tells the Free Press.

Mosey says no decision has been made about the future of the six houses that make up the property.

The property is the subject of a pending zoning change request that would alter its designation to "SD1" (Special Development District) from "PD" (Planned Development). The zoning proposal, still before the City Planning Commission, would open the property to a wider variety of potential uses such as retail shops, offices, restaurants and single-family residences.

Mosey said the rezoning would still allow for a hotel, and a small portion of the Inn could possibly be reopened in the future. Final decisions for the property's future could be made by year's end, she said, emphasizing that the site is in a historic district and all the houses will be preserved.

It's said to be the only Detroit hotel that hasn't reopened post-pandemic. The move reportedly cost 25 jobs.