Two hours of free entertainment, giveaways and a fashion show emceed by local actor-comedian Mike Bonner took place at Campus Martius on Saturday evening, hosted by the Downtown Detroit Partnership business group with support from the city, Bedrock Detroit and others. The featured performer is LaDarrel “Saxappeal" Johnson, a lifelong Detroiter.

Hot Sam's, founded by Sam Freedman on Brush Street in March 2021, is owned now by Tony Stovall and Cliff Green. They bought it from the founder's family in 1994 after working there for two decades as salesmen -- "which makes this a true American/Detroit dream personified," says their website. Lauren Stovall joined her dad's business as marketing director.

Its observance includes 100th anniversary T-shirts ($30) and a store history video (below). "We're survivors of the Great Depression, the Great Recession and the Covid-19 global pandemic," it proclaims at a promo for today's events.

The store shut for four months last year when the plague hit and pivoted to online sales from a hastily launched e-commerce site that was expanded with a loan from Fifth Third Bank. 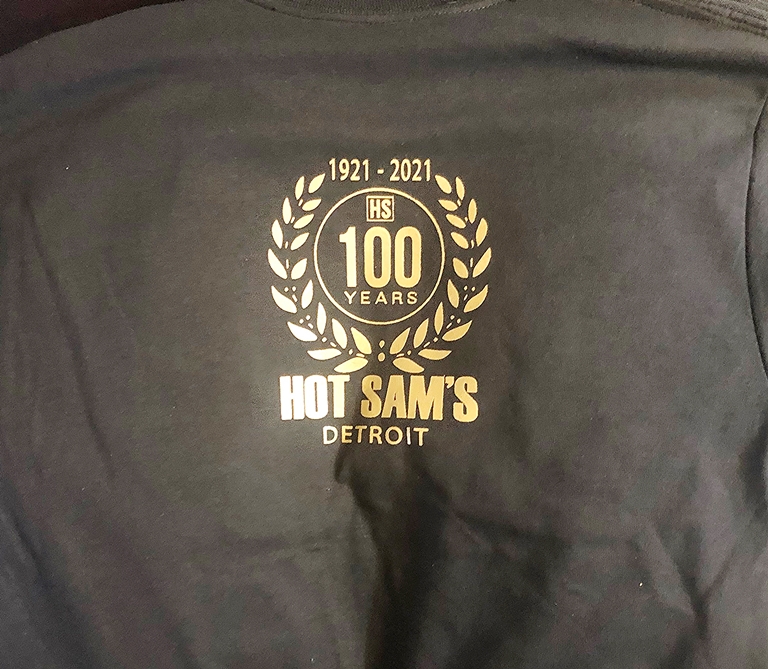 In addition to office and leisure wear, the business offers tailoring and custom-made clothes. It's trying to reach beyond customers who Lauren Stovall describes as "original gentlemen, our twist on OG," she says in a BLAC magazine interview this week.

"[They were] the men that wore suits, top hats, who really liked to get dressed up from head to toe, who took pride and pleasure in that whole suit ensemble. That customer has been our base, that has been our bread and butter.

"But as we look throughout downtown in the Financial District, which is where we are at, we see a lot of changes and businesses coming down. So that brings in a new potential clientele of a younger modern man.

"We've had to change up our store. ... For a long time, we didn’t even carry jeans in the store. We were primarily a suit kind of shop. Now, we’re getting more casual, especially coming out of the pandemic. Nobody is really dressing up. We're at home where we have lounge wear, leisure type of clothing. ...

"We went 99 years without having an e-commerce store. We launched it in the midst of the pandemic and it’s allowed us to have a broader reach."