Unsurprisingly, the head of Livingston County's Republican Party is upset that "drag queens and kings will entertain with hilarious bingo and fabulous drags shows" at city-organized event in Howell.

The nighttime fundraiser during next month's 61st annual Howell Melon Festival is for those over 21 and has sold out. That doesn't keep Meghan Reckling, a 36-year-old state Senate aide, from urging Facebook followers to email a city agency hosting the festival to "let them know your thoughts!" 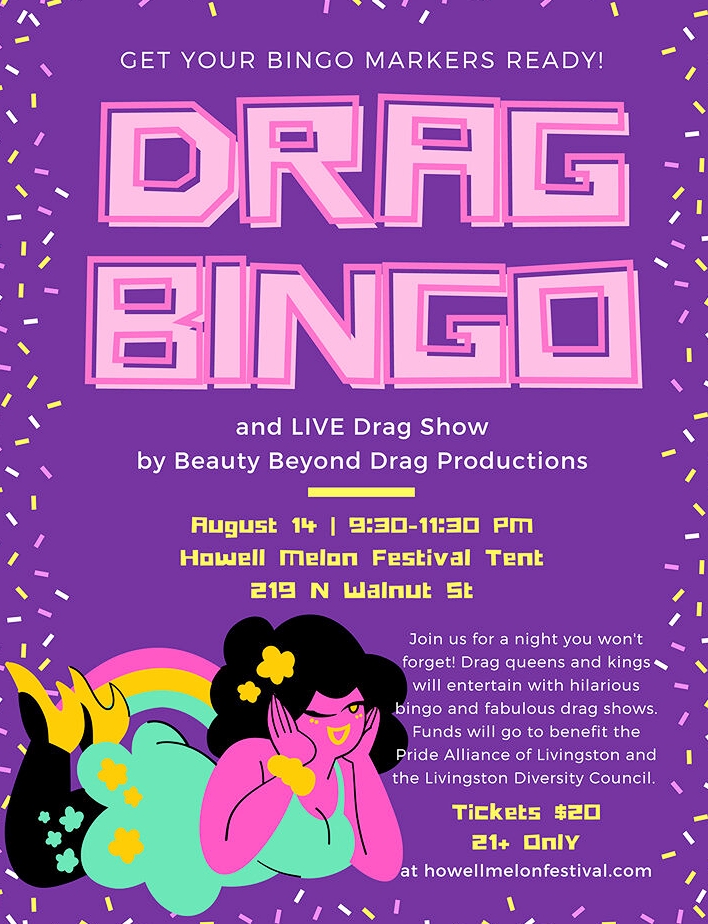 This is disappointing to see happening here. The Howell Melon Fest is supposed to be a family-friendly event and not one that should be sexualized with an event like this. ...

At 9:30 p.m., there are plenty of kids downtown getting ice cream and hanging out. This event is being advertised as a "raunchy" event. Hosting a raunchy event downtown, in a tent, around kids is inappropriate.

You can limit the age of people sitting at the tables inside the tent, but the kids downtown will still be subjected to the event's content. You can't claim the event isn't sexual when they are explicitly advertising it will be. ...

Whether it's a wet t-shirt contest or raunchy drag queen bingo, this is not the appropriate time nor place for an event of this nature.

Her outcry triggers over 3,600 comments in three days, including one from Howell resident Kimberly Baker, who describes herself as "a huge supporter of yours" and posts:

"What exactly is wrong with an adult entertainment venue featuring drag queen bingo? I consider myself pretty conservative, but this doesn't even remotely bother me in the slightest. It's for adults.

"Honestly, have you ever went to a drag queen bingo before? It's quite fun and entertaining. It's not like they hold you hostage, spike your drink with a drag drug and make you wear a tutu then you magically become a queen. Don't like it, don't go."

A day after Reckling's post, the city responded in a three-paragraph statement reaffirming that it "consistently embraces diversity in all forms [and] has a robust anti-discrimination policy that values the rights and equality of all people. Specifically included in this policy is our support of the fair and equal treatment for the gay and transgender community. ... The event programmed by the the Howell Area Parks and Recreation Authority does not violate our civic event policy."

Parks and recreation director Tim Church says in a separate handout: "We do plan on allowing the event to run as there are community members wanting to participate. However, the venue will more than likely change. A secondary location is still to be determined."

The Pride Alliance of Livingston and the Livingston Diversity Council share part of the proceeds from $20 tickets to the two-hour Aug. 14 event staged by Beauty Beyond Drag Productions, a Grand Rapids business.

Reckling, a MSU graduate living in Webberville, owns a campaign consulting firm and a graphics design agency. Since 2019, she has been chief of staff for Sen. Lana Theis of Brighton.