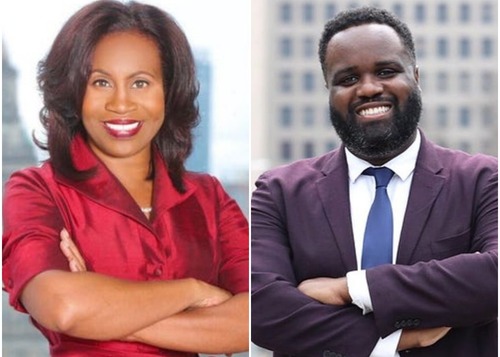 The Detroit Free Press editorial board has again come out against the re-election of Detroit City Clerk Janice Winfrey, saying "we remain convinced that it is time for her to relinquish her office."

Winfrey has become a source of anxiety in critical elections, though it's unclear to what extent she or limited resources are to blame. There were equipment failures and counting discrepancies at Detroit precincts in 2016, when Donald Trump won the state by less than 11,000 votes and third-party candidate Jill Stein sought a recount. After more counting discrepancies surfaced in last August's primary, the Michigan Secretary of State got involved to ensure a smoother process in the general.

(Denzel) McCampbell is a field-tested voting rights activist who pledges to apply the tactics he learned as a community organizer to engage more of Detroit's residents in the political process. A late addition to the city's charter revision commission (as the 10th-highest vote getter, he joined the body after an elected commissioner resigned her seat), he has also served as Detroit Congresswoman Rashida Tlaib's communications director.

McCambell's previous employer, Engage Michigan, is among a network of grassroots organizations that partnered with the League of Women voters to win passage of a 2018 ballot initiative that made it dramatically easier for Michiganders to vote absentee. McCampbell says he resolved to challenge Winfrey after concluding that her office was doing too little to spread the word about the absentee reform, leaving many Detroit voters in the dark about their options to vote safely during a public health crisis.

Tlaib's unapologetically progressive politics rub some of her fellow Democrats the wrong way, but precious few members of Congress outshine her when it comes to helping constituents tap government services. McCampbell says working for Tlaib has taught him how to reach Detroiters who distrust government or lack access to the internet. He says reaching alienated voters will require a door-to-door campaign like the one the city has waged to promote vaccinations against Covid-19.

Winfrey, who is seeking her fifth term, narrowly fended off a challenge from now Lieutenant Governor Garlin Gilchrist in 2017, who the paper endorsed for clerk. The top two vote-getters in the Aug. 3 primary will advance to the general.