FBI made 'fundamental errors' in Larry Nassar case, according to DOJ

FBI agents in the Indianapolis field office "failed to respond to allegations of sexual abuse of athletes" by former gymnastics physician Larry Nassar "with the urgency that the allegations required," the Inspector General of the U.S. Department of Justice has found. 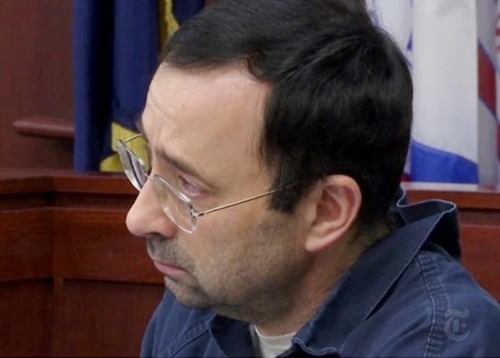 A new report on the Nassar investigation was revealed today by the Indianapolis Star, which reports:

Officials with the Indianapolis FBI office violated agency procedures, made false statements and exhibited "extremely poor judgment" in the handling of 2015 sexual abuse allegations against longtime USA Gymnastics team doctor Larry Nassar, according to a new report from the Inspector General of the U.S. Department of Justice.

The field office did not notify authorities in Michigan, including police and other FBI offices, and "and failed to take other steps to mitigate the ongoing threat posed by Nassar."

The report states that such neglect allowed Nassar to molest an additional 120 women between the time the FBI office was made aware and September 2016, when his activities were revealed by an Indianapolis Star investigation. The paper further reports:

The FBI's delay in investigating the 2015 allegations has long been a point of contention for survivors. In June 2020, a group sent a letter to the justice department asking why it had not released its report on the FBI’s handling of the case.

“It is clear that the FBI failed to protect our nation’s finest athletes and many other vulnerable children and young women from a vicious sexual predator," said the letter to Michael Horowitz, the Inspector General, that was signed by more than 120 Nassar survivors. "But we still do not know who exactly in the FBI participated in the cover up and whether misconduct reached into the higher ranks of the Justice Department.”

Among those signing the letter were Olympic gold medalists Simone Biles, Aly Raisman, Jordyn Wieber and Madison Kocian, plus NCAA champion Maggie Nichols. Nichols was the first gymnast to report Nassar to USA Gymnastics and was the central character in the 2020 Netflix documentary Athlete A.

The report, damning as it is, further inflamed advocates for Nassar's victims, including attorney John Manly, who represents 250 victims. He called the report a “whitewash” and a “disgrace.”

The investigation does not imperil Nassar's convictions. He was sentenced to 60 years in federal prison, as well as 40 to 125 years in state prison.