The planned Detroit Center for Innovation will not go on the so-called "fail jail" site near Gratiot and St. Antoine downtown. But the Free Press is reporting the project now has another high-profile player, angling to land it on their own parcels near Woodward -- the Ilitch organization: 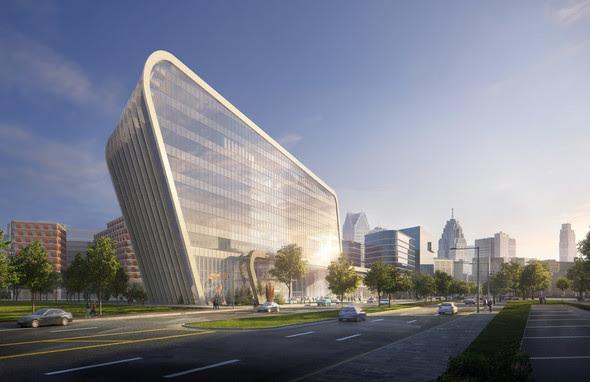 A watercolor concept of the $300-million Innovation Center. (File photo)

The $300-million-plus project, which was to be constructed by billionaires Dan Gilbert and Stephen Ross, was canceled early Wednesday.

But Christopher Ilitch has been negotiating with Ross to move the project, which was to include a campus for the University of Michigan, to land behind the Fox Theatre, multiple sources with knowledge of conversations told the Free Press. The sources requested anonymity because they were not cleared to talk with the news media.

It's unclear whether the details have been wrapped up on the new location or how long the conversations between Ilitch's company and Ross' company have been going on, although sources said they started well before Wednesday's announcement by Ross.

The site is in the heart of the Ilitch's troubled District Detroit, which has been the focus of criticism in recent years; the company rolled out lavish plans for a mixed-use residential and entertainment district, as part of a bid for public funding of Little Caesars Arena. However, little has been built there, and the company has garnered national publicity for its failure.

When Ross' company spokespeople announced the loss of the project for the jail site, they said it would be built elsewhere, but didn't say where.