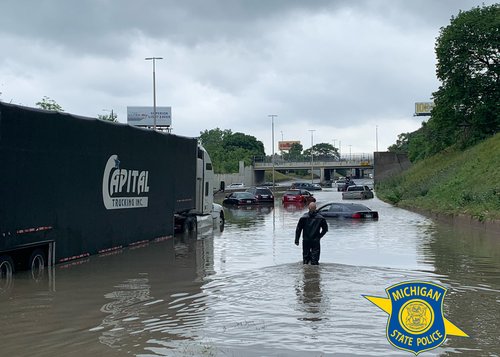 Recent flooding on I-94 and Trumbull in Detroit. (Photo: Michigan State Police)

It's raining heavily again in Detroit, where thousands of residents are still emerging from the latest round of floods two weeks ago. So it feels like as good a time as ever to boost a comprehensive explainer on why basement backups occur despite the Detroit Water and Sewerage Department's imposition of a much-loathed drainage fee to pay for storm water infrastructure upgrades.

According to Planet Detroit's "Paying to get flooded: Understanding Detroiters’ sewerage costs," the average Detroiter pays three-fourths of their monthly water bill to sewer and drainage services, helping prevent untreated discharges into the Detroit and Rouge Rivers via treatment facilities and retention basins that add capacity in times of flooding.

Sometimes, however, it rains so hard that even this infrastructure is overwhelmed. But while money is needed for upgrades, Detroiters, many of whom are low-income, are already paying an outsized portion of the regional sewage system's costs.

As Planet Detroit explains it, the issue lies in the fact that the Detroit Water and Sewerage Department, and now the Great Lakes Water Authority, have charged cities based on the volume of wastewater they contribute to the system. And Detroit, which began developing its infrastructure prior to the 20th century, has an antiquated combined system that, unlike the suburbs, passes on storm water too.

This year, GLWA will charge Detroit more than $194 million for sewerage costs, or 40 percent of the regional sewerage budget. This means that Detroiters, who account for just 25 percent of GLWA’s sewerage customers and represent only one of its 19 wholesale customers, cover an outsized proportion of the region’s shared sewer costs.

This cost allocation is not new. GLWA inherited a system from DWSD that also charged Detroit in large part based on wastewater volume.

As the city has lost population, the burden of those costs have gotten heavier for each remaining Detroiter. As it stands today, about 675,000 Detroiters are covering the costs of a sewer system that once served 1.8 million people.

The inequity is poised to remain through at least 2029 under a current GLWA agreement. DWSD's former chief financial officer tells Planet Detroit that ignores "the history and current reality of the region’s development pattern—namely that the suburbs were only ever able to grow by being connected to Detroit’s wastewater infrastructure."

“You are penalizing Detroiters for staying in Detroit, first and foremost, and for rain that gets into a sewer system that’s shared by all,” (said Marcus Hudson). “You should not be able to cross 8 Mile and leave your fixed costs behind. We all share in the same system.”