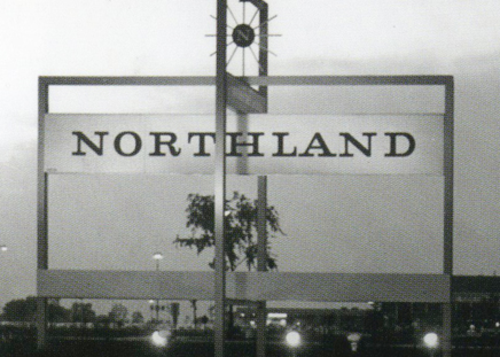 It's official: Northland mall, a defunct shopping center that holds a special place in Boomers' hearts, has been purchased by a firm with plans to redevelop it. Bloomfield Hills-based Contour Companies closed on the property Thursday in an $11-million deal with the city of Southfield, the Free Press reports.

The vision for the 97-acre site at the Lodge and Greenfield requires a mix of demolition and preservation:

The latest version of Contour's plan for Northland wasn't available Thursday, although the company presented a proposal last fall for a multi-phase redevelopment with 1,500 market-rate rental apartments, spread across 14 new five-story buildings, plus the use of Northland's ground-level retail spaces, where about 250 lofts would be constructed.

Several of the new buildings are to face Greenfield Road and have ground-floor commercial space.

Additionally, the old four-story Macy's building — originally a Hudson's — is to be saved and transformed into "Hudson's City Market" with a possible food hall, home furnishings shops and offices, according to the earlier proposal.