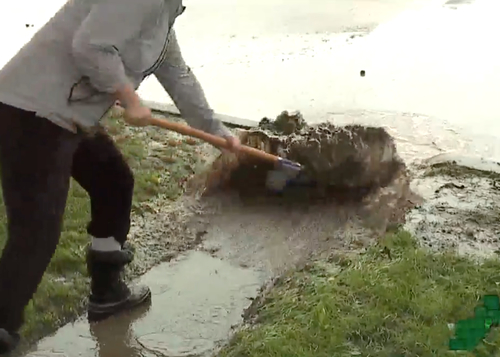 A Grosse Pointe Farms resident pushes water away from her home. (Screengrab: WXYZ)

Metro Detroiters who just got done cleaned up after late June's floods saw water pool in their basements again Friday as heavy rains hit the region.

The Free Press had this dispatch from the east side:

"We spent $2,800 just a few weeks ago trying to repair damage to our basement ... We had just finally gotten it dried out earlier this week. This has all been so frustrating," said Morningside resident Ellen Mariscal, whose home on Detroit's Audubon Road flooded again.

"We have a son with asthma, so are very concerned about mold — not to mention the damage this is doing permanently to our foundation and the stability of this old house," Mariscal added.

Part of the problem may have stemmed from a partial power outage at the Blue Hill Pump Station, at Mack and Cadieux in Detroit, the Great Lakes Water Authority told media. The issue was resolved and the authority said it would "conduct an after-event analysis and work with the residents in the tributary system to determine if flooding was experienced."

A man uses a metal rod to clear a blocked storm drain during today’s floods in Metro Detroit. @wdet pic.twitter.com/DqkU9rt66I

Oakwood Boulevard is flooded at I-94. pic.twitter.com/01NcAEbQvv