Lawyers for Barry Croft, one of the men charged in the plot to kidnap, "try" and presumably kill Gov. Gretchen Whitmer last fall, have been fighting the release to the media of certain photos and a video depicting their client. And now we know why: Croft looks like a total dork. 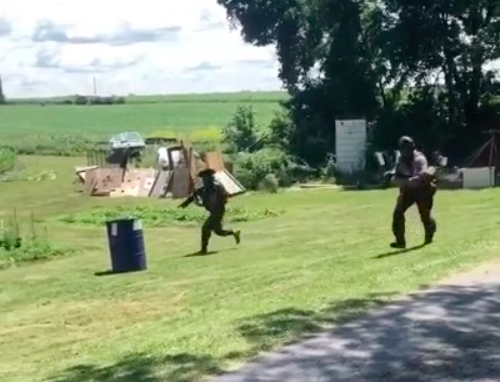 The materials were released Wednesday, and The Detroit News published them.

In one photo, he's holding a so-called "boogaloo" flag, which apparently indicates affinity with the anti-government, white-supremacist boogaloo movement. In another, he holds the customary badass penis substitute long gun of some sort; The News describes it as a "tactical shotgun" and we'll take their word for it, because we don't read Guns & Ammo on the toilet like Barry and the boys.

But it's the video that really slays. Croft is shown in "training exercises" at some rural Wisconsin location, running from barrel to barrel -- which we believe is known as "cover" in the Guns & Ammo readership -- firing his weapon at an unseen target. Croft favors one of those ZZ Top-style, untrimmed beards that tells every woman in eyeshot, "you do not want to have sex with me" and -- this is the funny part -- the tricorner, "patriot" hat worn by American revolutionaries. Because that's what Barry is, see? A patriot! Also, he is bald. So he needs the sun protection.

Or, perhaps, seized for evidence.