Detroit police brass will investigate a Greektown incident captured on video Saturday night, in which an officer punches a man in the face, knocking him down and leaving him dazed. WDIV reports a "large-scale brawl" started soon after. 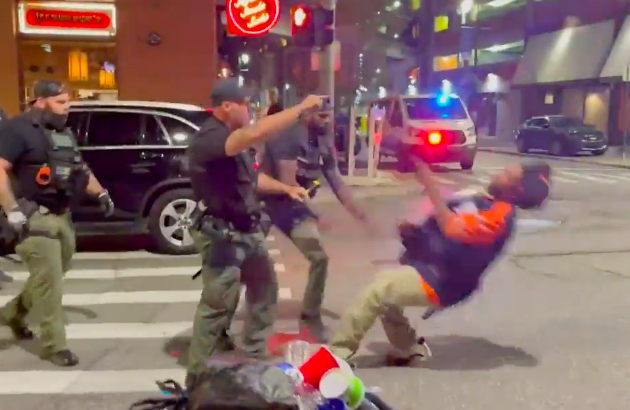 A man falls after a police punch in Greektown (Photo: Video capture)

The undated, 45-second clip, published Sunday in a Reddit group called "Fightporn," shows a group of officers approach a man standing in the street -- who does not appear to be threatening them or anyone else -- while one delivers a straight right that sends him sprawling. The officer then hauls him to a sitting position and braces him for a few seconds, until he eventually recovers.

Detroit police said they learned of the video via social media. In a statement, police said that Internal Affairs is reviewing the matter and will give updates "as soon as practicable."

The Greektown area has been troubled in recent weeks by crowds of unruly street partiers, and fights are common, often captured on phone video and shared on social media, which feeds the problem. One brawl in June showed civilians jumping on police as they tried to make arrests during a particularly large altercation, with multiple arrests.

The most recent incident was published as a post called "Detroit pigs handing out the brain damage." It has 1,500 comments and over 11,400 "upvotes" in under a day.